Items related to What Do You Say to a Hungry World?

W. Stanley Mooneyham What Do You Say to a Hungry World?

What Do You Say to a Hungry World? 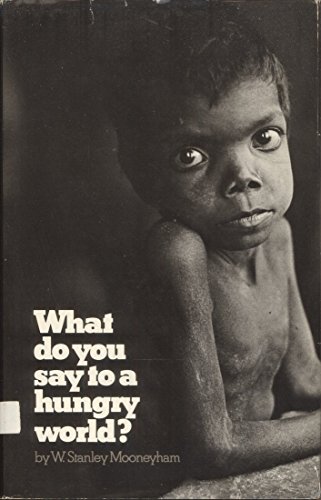 Meet Jobeda--who has seen her husband and 5 of children die of starvation and is a refugee in Bangladesh, waiting numbly for her 6th child to die. Meet Gokal Christie in India. His is so weak from starvation that he has barely enough strength to work around the house. His last crop was burned up in the drought and now he will have to wait a whole year for another crop--if he and his family are still alive. Meet Kayin. He owns 1/5 of an acre in Java, but the rice he harvests from it is barely enough to feed his family for the year. Any extra money he earns as a day laborer goes for cassava. He has no way to buy fertilizer to increase his production. Their stories, and others, in WHAT DO YOU SAY TO A HUNGRY WORLD? help to dispel some of the myths that surround the topic of hunger: that the starving masses are going to revolt (they can't, they are too weak). That the starving people wouldn't starve if they'd get up off their seats and work (they're too weak, there's no work). Other myths are dispelled as Stanley Mooneyham discusses the contexts in which hunger appears, presenting facts and figures, but always making them personal. Hunger and starvation come with poverty, and are perpetuated by ignorance. The world's climate is changing, producing drought and cooling and warming trends. Hunger also goes along with dispossession, the migration of peoples because of war or political oppression. It is also part of the pull of urbanization, the tendency for poor people to flock to the city in hopes of a better life. "The System" tends to perpetuate hunger, the way things work so that the rich get richer, the poor poorer. Affluent nations continue to eat up the world's resources at the expense of the less developed nations. What can be done about all of this? This book offers very practical ways that those who live in the richer nations can indeed impact world hunger in a positive manner, both you and I.

1. What Do You Say to a Hungry World?

Book Description Word Publishing Group. Hardcover. Condition: GOOD. Spine creases, wear to binding and pages from reading. May contain limited notes, underlining or highlighting that does affect the text. Possible ex library copy, will have the markings and stickers associated from the library. Accessories such as CD, codes, toys, may not be included. Seller Inventory # 2964838897

2. What Do You Say to a Hungry World?

Book Description Word Publishing Group, 1975. Condition: Good. A+ Customer service! Satisfaction Guaranteed! Book is in Used-Good condition. Pages and cover are clean and intact. Used items may not include supplementary materials such as CDs or access codes. May show signs of minor shelf wear and contain limited notes and highlighting. Seller Inventory # 0876804245-2-4

3. What do you say to a hungry world?

4. What Do You Say to a Hungry World?