Items related to The magical ritual of the sanctum regnum interpreted...

Lévi, Eliphas The magical ritual of the sanctum regnum interpreted by the Tarot trumps 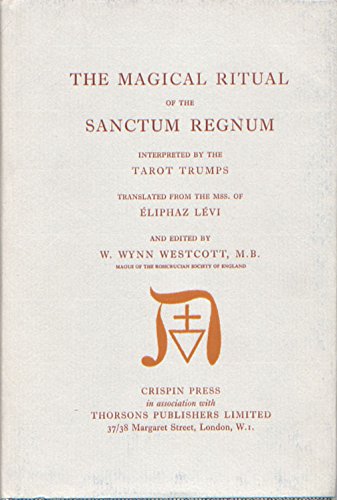 "The Magical Ritual of the Sanctum Regum" is a 1896 occult book written by Éliphas Lévi focusing on tarot cards and their occult meanings. Éliphas Lévi (8 February 1810 - 31 May 1875) was a French author of the occult and ceremonial magician. Other notable works by this author include "L'assomption de la femme" ("The Assumption of Woman") (1841), "La mčre de Dieu" ("The Mother of God") (1844), and "Le livre des Larmes" ("The Book of Tears") (1845). Contents include: "The Magician-Le Bateleur", "The Priestess-La Papesse", "The Emperor-L'empereur", "The Pope, or Hierophant-Le Pape", "The Chariot of Hermes-Le Chariot", "The Wheel of Fortune-La Roue de Fortune", "Death-La Mort", "Temperance-La Temperance", "The Star-L'etoile", etc. Many vintage books such as this are becoming increasingly scarce and expensive. We are republishing this volume now in an affordable, modern, high-quality edition complete with a specially commissioned new biography of the author.

Eliphas Levi (1810–1875) was the greatest innovator in the revival of Western occultism, most significantly with his great leap of imagination that linked the tarot trumps to the letters of the Hebrew alphabet. He set out his tarot theory in his book "Transcendental Magic," but never revealed its magical application. This was finally made public in 1896 when Dr. Westcott—creator of the Golden Dawn—translated and printed Levi's secret manuscript. It is this rare text that we are now re-issuing.

Eliphas Levi has influenced many important occultists, including A.E. Waite and Aleister Crowley. His best-known works, History of Magic and Transcendental Magic are published by Weiser.

Magical Ritual of the Sanctum Regnum Interpreted By the Tarot Trumps