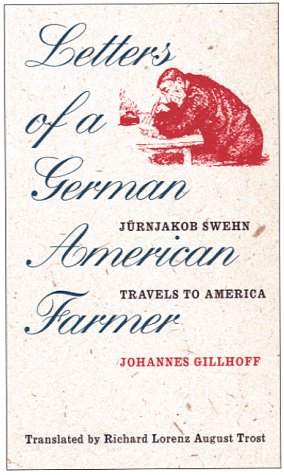 Early in the 20th century, drawing upon the hundreds of letters written to his father by students who had emigrated to north-eastern Iowa from Mecklenburg, in north-eastern Germany, Johannes Gillhoff created the composite character of Juernjakob Swehn: the archetype of the upright, honest mensch who personified the German immigrant, on his way to a better life through ambition and hard work. Gillhoff's farmer-hero, planting and harvesting his Iowa acres, joking with his neighbours during the snowy winters, building a church with his own hands, proved so popular with the German public that a million copies of this book are in print. Now for the first time this book is available in English. "First, let's talk about pigs", Juernjakob Swehn writes from his farm in Iowa. "In America, pigs have a curly tail and talk in Low German so I can understand them." Swehn builds a log house and makes a success of farming, marries a woman who's "a whole different nation that has its confidence from the inside", raises a family, and becomes an elder in the Lutheran Church. He recognises his good fortune but acknowledges that memories of his village grow stronger every year, that "being homesick is the best thing that home can do for you...no power on earth holds on to you like your homeland". It is the sense of home, both in Iowa and in Mecklenburg, that makes Juernjakob Swehn appeal to today's readers as much as he appealed to readers in 1916.

Johannes Gillhoff (1861-1930), like his father, grandfather, and great-grandfather, taught school in his rural village in Mecklenburg-Vorpommern; he later became a professional educator, writer, and editor.

Book Description University Of Iowa Press, 2000. Condition: Good. A+ Customer service! Satisfaction Guaranteed! Book is in Used-Good condition. Pages and cover are clean and intact. Used items may not include supplementary materials such as CDs or access codes. May show signs of minor shelf wear and contain limited notes and highlighting. Seller Inventory # 0877457190-2-4