Items related to Walt Whitman and the Earth: A Study of Ecopoetics (Iowa...

Walt Whitman and the Earth: A Study of Ecopoetics (Iowa Whitman Series) 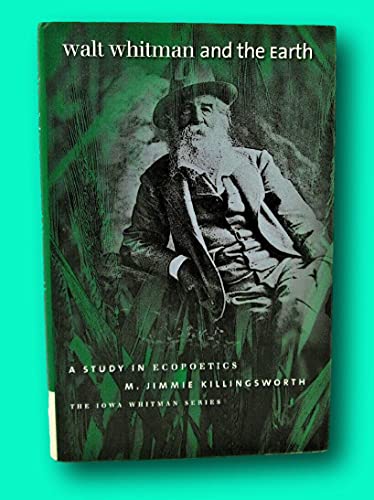 How did Whitman use language to figure out his relationship to the earth, and how can we interpret his language to reconstruct the interplay between the poet and his sociopolitical and environmental world? In this first book-length study of Whitman’s poetry from an ecocritical perspective, Jimmie Killingsworth takes ecocriticism one step further into ecopoetics to reconsider both Whitman’s language in light of an ecological understanding of the world and the world through a close study of Whitman’s language.

Killingsworth contends that Whitman’s poetry embodies the kinds of conflicted experience and language that continually crop up in the discourse of political ecology and that an ecopoetic perspective can explicate Whitman’s feelings about his aging body, his war-torn nation, and the increasing stress on the American environment both inside and outside the urban world. He begins with a close reading of "This Compost," "Whitman’s greatest contribution to the literature of ecology," from the 1856 edition of Leaves of Grass. He then explores personification and nature as object, as resource, and as spirit and examines manifest destiny and the globalizing impulse behind Leaves of Grass, then moves the other way, toward Whitman’s regional, even local appeal—demonstrating that he remained an island poet even as he became America’s first urban poet. After considering Whitman as an urbanizing poet, he shows how, in his final writings, Whitman tried to renew his earlier connection to nature.

Walt Whitman and the Earth reveals Whitman as a powerfully creative experimental poet and a representative figure in American culture whose struggles and impulses previewed our lives today.

Jimmie Killingsworth is a professor of English at Texas A&M University, author of The Growth of "Leaves of Grass": The Organic Tradition in Whitman Studies and Whitman’s Poetry of the Body: Sexuality, Politics, and the Text, and coauthor of Ecospeak: Rhetoric and Environmental Politics in America.

Now I am terrified at the Earth, it is that calm and patient,
It grows such sweet things out of such corruptions,
It turns harmless and stainless on its axis, with such endless
successions of diseas’d corpses,
It distills such exquisite winds out of such infused fetor,
It renews with such unwitting looks its prodigal, annual,
sumptuous crops,
It gives such divine materials to men, and accepts such
leavings from them at last.
—Walt Whitman, from "This Compost"

1. Walt Whitman and the Earth: A Study of Ecopoetics (Iowa Whitman Series)

Book Description University Of Iowa Press, 2004. Hardcover. Condition: Good. Item may show signs of shelf wear. Pages may include limited notes and highlighting. May include supplemental or companion materials if applicable. Access codes may or may not work. Connecting readers since 1972. Customer service is our top priority. Seller Inventory # mon0002263022

2. Walt Whitman and the Earth: A Study of Ecopoetics (Iowa Whitman Series)

Book Description University Of Iowa Press, 2004. Condition: Good. A+ Customer service! Satisfaction Guaranteed! Book is in Used-Good condition. Pages and cover are clean and intact. Used items may not include supplementary materials such as CDs or access codes. May show signs of minor shelf wear and contain limited notes and highlighting. Seller Inventory # 0877459037-2-4

3. Walt Whitman and the Earth: A Study of Ecopoetics (Iowa Whitman Series)

4. Walt Whitman and the Earth: A Study of Ecopoetics (Iowa Whitman Series)