Items related to Swordspoint: A Novel 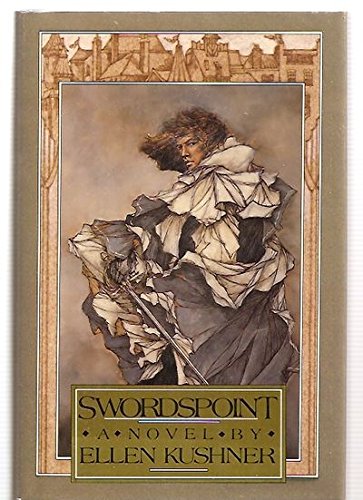 In a nameless city where elegance and decadence coexist less than harmoniously, the great swordman Richard St Vier is forced to become involved in a plot to gain control of the city

forerunner to The Fall of the Kings now with three bonus stories.

Hailed by critics as “a bravura performance” (Locus) and “witty, sharp-eyed, [and] full of interesting people” (Newsday), this classic melodrama of manners, filled with remarkable plot twists and unexpected humor, takes fantasy to an unprecedented level of elegant writing and scintillating wit. Award-winning author Ellen Kushner has created a world of unforgettable characters whose political ambitions, passionate love affairs, and age-old rivalries collide with deadly results.

On the treacherous streets of Riverside, a man lives and dies by the sword. Even the nobles on the Hill turn to duels to settle their disputes. Within this elite, dangerous world, Richard St. Vier is the undisputed master, as skilled as he is ruthless--until a death by the sword is met with outrage instead of awe, and the cit

“[Kushner] draws you through the story with such lucid, powerful writing that you come to trust her completely--and she doesn’t let you down...Watch this woman--she’s going to be one of the great ones.”
--Orson Scott Card