Items related to Every Child Deserves a Champion: Including the Child...

Danzig, Bob; Oettinger, Callie Rucker Every Child Deserves a Champion: Including the Child within You!

Every Child Deserves a Champion: Including the Child within You! 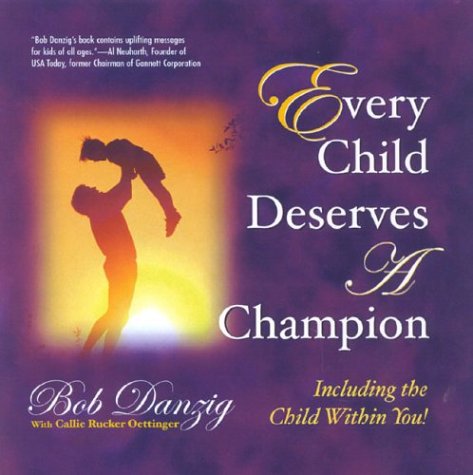 This book is a testimonial to all those who have been a champion or had a champion in their own lives. Includes CD.

Since relinquishing the helm of the Hearst Newspapers in 1998, Robert J. Danzig has poured much of his energy into writing and speaking about leadership, including his first book, "The Leader Within You," a business best seller. He followed that with inspirational works, including "Angel Threads" and "Vitamins for the Spirit," a collection of quotes.

His books are "all kind of hokey," he says self-effacingly, "but the essence is to offer a message of hope."

Danzig has written two new inspirational books with the purpose of inspiring the parents and social workers who struggle to find a better life for foster-care children << of which he was one << and giving those 542,000 children "a sense of hope and personal possibility."

"Every Child Deserves a Champion" and "There Is Only One You" are in bookstores under the imprint of The Child Welfare League of America, the nation's oldest and largest charity working on behalf of neglected children. Both books come packaged with songs on CDs that echo Danzig's messages: "You Are Worthwhile" and "There Is Only One You." All proceeds will support the league's work.

Written with Callie Rucker Oettinger, "Champion" shares stories from Danzig's experiences and others who championed children. One is about a chance encounter in a movie theater that changed the life of Barb Fenster, then a TV news producer for KING 5, NBC affiliate in Seattle.

Fenster noticed a boy staring at her and her 10-year-old son. Afterward, the boy approached and asked if she'd like to have more children. "You looked like a really nice Mom, and your son looks happy. I'm a foster kid and the family I'm staying with is moving," the boy said. "I could be your foster son."

The stunned Fenster took his name and telephone number and later, with her husband, adopted two children but not the boy from the movie theater. He disappeared back into the system. Fenster did an award-winning documentary on children lost in the foster-care system. She now works on behalf of foster children in Washington state.

"There Is Only One You" is a picture book constructed around words of encouragement for every child. Danzig calls it "an expanded Hallmark card." It begins, "There is only one you. You are unique in the universe. Only you can hum your favorite song ... smile your smile ... live your dreams."

Danzig, shuttled from foster home to foster home as a child, remembers growing up "with a melancholy lump in my throat."

His parents divorced, placed their 2-year-old in foster care and left Albany, N.Y., in the middle of the Depression. He remembers just five of the many homes he lived in over 14 years. There was no abuse; he recalls instead the kindness of poor families "who had room in their heart to bring in a strange kid."

Still, no one lit a fire until a social worker, Mae Morse, looked him in the eye and said, "You are worthwhile." He also remembers Margaret Mahoney, diminutive office manager of The Albany Times Union, pronouncing not long after hiring him as an office boy, "You are full of promise."

"Those words were magical. They stayed with me all my life," Danzig says. "Foster care is about survival and the hopes that you won't be pushed away again."

With five children and five grandchildren, Danzig never felt compelled to find the parents who abandoned him. "I didn't want to go back and probe. Life invites you to move on, and I had moved on."

But a quarter-century ago, his father read of Danzig's appointment as general manager of Hearst Newspapers and sent him a vase embroidered with newspaper stories about the new chief executive. The father later visited the Danzigs, met his grandchildren and bonded on fishing trips with the one Danzig child who was adopted. - Chris Connell, San Antonio Express-News Nov. 3, 2003

1. Every Child Deserves a Champion: Including the Child within You!