Items related to Bernard Of Clairvaux: On Baptism And The Office of...

Bernard Of Clairvaux: On Baptism And The Office of the Bishops (Cistercian Fathers series) 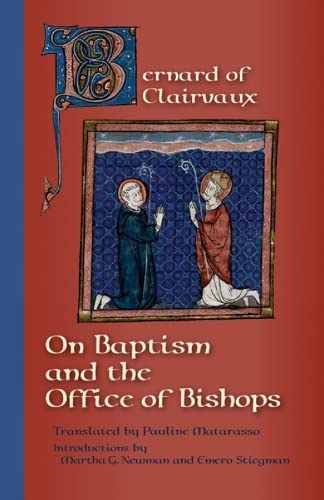 Two lengthy letters from the abbot of Clairvaux illuminate the transition in theological method in the mid twelfth-century. In his letter to the bishop of Sens on the responsibilities of his office, Bernard articulates his monastic conviction that authority in the Church must be accompanied by contemplative virtues, especially a deeply ingrained humility.

Pauline Matarasso is a scholar, translator, and poet with a particular interest in medieval history and literature focused on the Benedictine tradition, though her subjects are wide-ranging and embrace the French prose poet Christian Bobin and the modernist writer Sylvia Townsend Warner. She has spent most of her life in rural settings in England and France, much of it on working farms. She is an oblate of Howton Grove Priory, near Hereford. Among other books she has written and edited, she is the translator and editor of The Cistercian World: Monastic Writings of the Twelfth Century (Penguin, 1993) and translator of John of Forde's The Life of Wulfric of Haselbury, Anchorite (CF 79; Cistercian Publications, 2011).

. . . gives us a taste of a devout and learned soul who reflected deeply upon the mysteries of faith and did so as a 'loving listener.'Cistercian Studies Quarterly

1. Bernard Of Clairvaux: On Baptism And The Office of the Bishops (Cistercian Fathers 67)

2. Bernard Of Clairvaux: On Baptism And The Office of the Bishops (Cistercian Fathers series)