Items related to Herbs and the Earth

Beston, Henry Herbs and the Earth

Herbs and the Earth 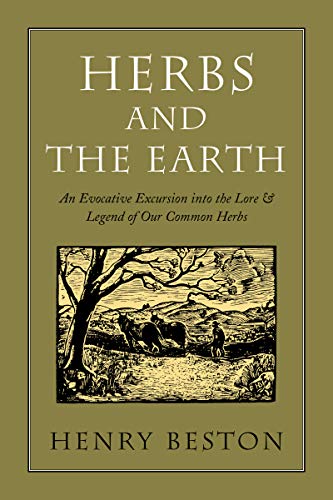 From one of America's most sensitive and fervent nature writers comes this classic of herbal lore and legend, new in paperback. This is not strictly a gardening book (although there is plenty for the gardener to learn in it), but a singular example of a man thinking about what he grows not only how it grows, but its roots in religion, the Bible, history and medicine. The book was written at Chimney Farm, the Maine homestead immortalized in Northern Farm to which he repaired in 1931 with his wife Elizabeth Coatsworth, and where he died in 1968.

Beston described his efforts as "part garden book, part musing study of our relation to nature through the oldest group of plants known to gardeners." But, as Roger Swain observes in his moving introduction, "Herbs and the Earth has an intensity that evokes the herbs themselves, as if, pressed between the pages, their aroma has seeped into the pages." The book is lovingly illustrated with the woodcuts of the great American stone cutter/letter designer/craftsman John Howard Benson.

Beston (1888-1968), a New England naturalist and children's book author whose "chosen home" from 1944 on was a farm in Maine, here writes with an almost Proustian dedication about herbs as human "familiars" of ancient lineage. "The green life of earth is a deeper life than we know," he avows, and walks a leisurely path through species including sage, marjoram, basil and other mainstays. Always exercising a "gardener's musing mind," the author gently but firmly reproaches "the age in which we live" for having "lost the earth," and exchanged this for a "vulgar curse of gigantism," with gardens "fallen into so impersonal a rut." Writing as an appreciator of "subtleties of light" and the revelations of "a simple leaf," Beston pens a hymn in prose, out of print for a dozen years, of unusual depth and eloquence. BOMC alternate.
Copyright 1990 Reed Business Information, Inc.

1. Herbs and the Earth

2. Herbs and the Earth

3. Herbs and the Earth

4. Herbs and the Earth

5. Herbs and the Earth

6. Herbs and the Earth