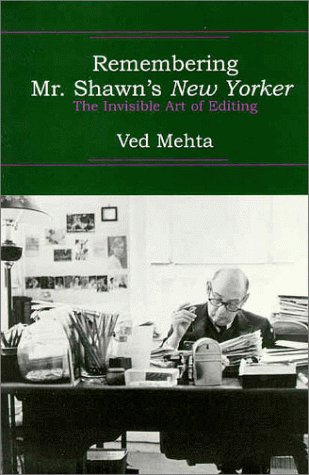 Ved Mehta has often been accused of being the least lively, most irrelevant writer at the New Yorker magazine. But his vivid, eccentric, almost Thurberesquely embittered memoir of his life there stands as the most revealing book yet on the most fascinating magazine in modern history. That's right, it's more revealing than Brendan Gill's classic Here at the New Yorker, Jay McInerney's cocaine-edged satirical roman à clef, Bright Lights, Big City, and Here but Not Here: A Love Story, by Lillian Ross, the mistress of the mag's legendary editor William Shawn.

It speaks volumes about the nature of the New Yorker that Mehta is capable of saying--apropos of one of his articles about theologians--that "writing about God presented special difficulties, both because of the nature of the subject and because of the sensibilities of the various believers." Mehta is dead serious here, as he apparently always is. Only in the New Yorker, kids, could anyone in the magazine biz get away with the sky-high idealism Mehta eloquently describes. And only a guy like Mehta could describe the specifics of Shawn's invisible art of editing and the human maelstrom that swirled around him.

Writing about Mr. Shawn presents special difficulties because he worked in mysterious ways and thwarted attempts to cast light on him as effectively as a black hole in outer space. But Mehta was a sort of surrogate son to Shawn, not only part of the innermost circle of the xenophobic publication but sometimes the sole non-family member invited to the Shawns' Thanksgiving feasts. Mehta takes us to the parties where the phenomenally repressed Shawn "cut loose" (who would've guessed this was one of his favorite phrases?), pounding out "Anything Goes" and "Don't Fence Me In" on the piano in a rocking stride style.

The best stuff in the book is its portrait of Mr. Shawn's intriguing wife, Cecille, the comments of their movie-famous son Wallace (coauthor of My Dinner with Andre), and the bilious dinner-table and office gossip that Mehta lets us overhear. Did you know that the talented writer Maeve Brennan went insane and lived in the New Yorker's ladies' room until she started smashing the glass portion of the business manager's door? (For the full story, see William Maxwell's introduction to Brennan's brilliant Springs of Affection, posthumously released in 1997.) Mehta is also in some ways in a better position than Lillian Ross to explain her function in William Shawn's life: "desk-bound as he was, and hemmed in by his phobias, [Shawn] relied on Lillian as his special eyes and ears, to keep him abreast of things going on in the city and in the culture at large."

Alas, times in the publishing industry changed brutally, while Mr. Shawn did not. Mehta gives good dirt about the bloody battle for succession to Shawn's throne--one of the plotters was dubbed "the Slasher." He never gives deeper insights than when he tells a story about the New Yorker's troubles as only an insider could while entirely, sublimely missing the point as only a New Yorker insider can. He's so loyal to his editor that he seems unaware that sometimes the man and the magazine were simply wrong, particularly when facts were altered in small ways in essays not billed as fiction.

Yet as countless New Yorker writers will tell you in person, but few have described in print, Mr. Shawn was also an editorial genius and a titanic soul. It is a privilege to be introduced to him by Mr. Mehta. --Tim Appelo

A fond remembrance of legendary New Yorker editor William Shawn and the changes that brought about his dismissal, by a former staff writer who spent three-and-a-half decades at West 43rd Street. Curiously, as this is part of his autobiographical Continents of Exile series, Mehta (Up at Oxford, 1993, etc.) sometimes paints his own story with rather broad strokes. Mehta does an extraordinary job, however, in describing what it was like to work with Mr. Shawn (as he insists on calling him) and his day-to-day editorial process. The opening pages are remarkable in demonstrating Shawns ability to guide a writer from an initial idea to its shaping as a New Yorker article. But, as the ever- admiring Mehta sums up, Shawns technical ability was the least of it: What informed and animated his editing were his judgment and wisdom, his thinking and vision. Shawn had been at the helm since 1952, following the death of founder Harold Ross. Mehtas recollections of his colleagues are often too scant, and one can sometimes sense the damning of his faint praise, as with Roger Angell. But the usual suspects are on hand: A.J. Liebling, Penelope Gilliatt, Edith Oliver, Joseph Mitchell, Lillian Ross, whose long affair with Shawn he mentions only in passing. His narrative thickens as he recounts office intrigues, the early intimations of Shawns eventual departure in 1987. He finds tremors as far back as the mid-1970s when mandatory retirement was instituted, displacing writers and editors intrinsic to Shawns style. He also recounts inner-office power struggles that found Shawn turning in his resignation as early as 1978. It didnt happen, but it had a profound impact on his final years at the magazine. Too admiring, perhapsas Mehta himself admits, there were too many long fact pieces that went unread and the fiction too often didnt go anywhere. Still, the high level of quality Shawn managed week after week is matchless, and Mehta effectively captures that era. -- Copyright ©1998, Kirkus Associates, LP. All rights reserved.