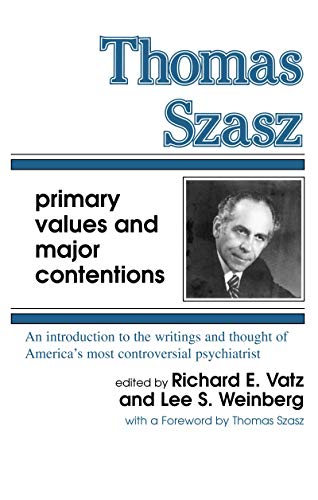 Psychiatrist Thomas Szasz has been challenging the very existence of "mental illness" for over twenty-five years. His landmark book The Myth of Mental Illness won him recognition as America's leading opponent of conventional psychiatric practice. Szasz argues that "mental illness" and its supposed "cure," psychotherapy, are myths and that there is no medical basis for treating people labelled "mentally ill" as sick. He opposes involuntary hospitalization and insists that people be held responsible when they break the law.

Thomas Szasz: Primary Values and Major Contentions is the first book to contain Szasz's essential values as well as criticism of Szasz and responses from his defenders. No other book organizes Szasz's major contentions in a readable and structured manner. Szasz's own words comprise the bulk of the book, which is designed as a means of introducing readers to Szasz without having to read all of his original works.

The editors have selected essays and excerpts from his major works that illustrate his value system, his central arguments about human behavior and human responsibility, and also the nature of the debate generated by these views. For students, professionals, and interested lay persons, this book contains the very best of Szasz as he grapples with such issues as
- mental illness as a myth
- autonomy

A complete bibliography of Szasz's publications is included.