Items related to Against the Faith (The Skeptic's Bookshelf)

Herrick, James Against the Faith (The Skeptic's Bookshelf)

Against the Faith (The Skeptic's Bookshelf) 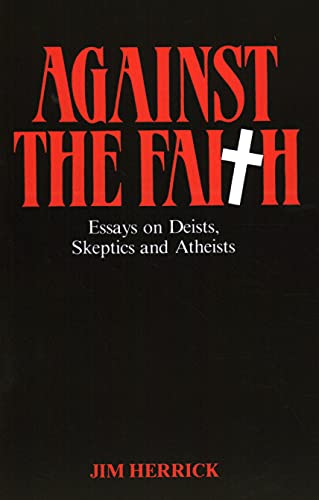 "The subject of this book is those who have placed themselves 'against the faith', in other words, those who have opposed the prevailing religious faith of their time. Such opponents adopt this position for a wide variety of reasons and in many different ways. They are sometimes fiery activists hammering against leaders and leading ideas and at other times are quiet, contemplative skeptics questioning all knowledge and all orthodoxy. They can be immersed in the politics of their time, like Bradlaugh or Thomas Paine. They can be poets like Heine and Shelley, historians like Gibbon, playwrights like Buchner, or novelists like George Eliot and Mark Twain. They may be scientists like Huxley, or philosophers like J.S. Mill. They may be most at home on the public platform, like Ingersoll, or in the study like Pierre Bayle. They can be relaxed men of the world like Hume or temperamental outsiders like d'Holbach. They may lead quiet and little known lives like the freethinker Collins or the clergyman Meslier, or they may be outstanding polymaths of their age, like Voltaire or Bertrand Russell.This book covers deists, skeptics and atheists. Without attempting to be comprehensive, I have tried to show that there is a spectrum between the three. There has often been close contact between deists, who gently criticize the Christian faith, skeptics who questions all knowledge, and atheists, who detach themselves from any belief in God. Occasionally individuals have held all these positions at different periods of their lives. Furthermore the distinction sometimes made between the respectable philosophic skeptic and the disreputable agitating atheist is not clear-cut: philosophers sometimes agitate and frequently rub shoulders with activists, and reformers and campaigners often think quite deeply.Since this book in the main covers Europe in the eighteenth and nineteenth centuries, the faith opposed is Christianity. A history of opponents to Hinduism, Islam and Buddhism would provide fascinating parallels, but that book has yet to be written. It is a mistake - and one to which opponents are particularly prone - to imagine the 'faith' as a monolithic entity, rather than an accumulation of various traditions. There can therefore be opposition to the faith from within as well as without and heresy and heterodoxy have sometimes been not far apart."

Jim Herrick (London, UK) is editor in chief of the Rationalist Press Association, literary editor of the New Humanist, formerly editor of the Freethinker and of the International Humanist News, and the author of a number of books on the history of humanism. He has written two books on the history of freethought and has worked in the humanist movement for over 25 years. Herrick, previously a school teacher, has carried out non-religious ceremonies including funerals, weddings and same sex affirmations. The international dimension to humanism is very important to him and he has traveled to meet humanists in many parts of the world.

1. Against the Faith: Essays on Deists, Skeptics and Atheists (Skeptic's Bookshelf)

Book Description Prometheus Books, 1985. Condition: Good. First Edition. Former Library book. Shows some signs of wear, and may have some markings on the inside. Seller Inventory # GRP26394886

Book Description Prometheus Books, Publishers. Hardcover. Condition: Very Good. A copy that has been read, but remains in excellent condition. Pages are intact and are not marred by notes or highlighting, but may contain a neat previous owner name. The spine remains undamaged. At ThriftBooks, our motto is: Read More, Spend Less. Seller Inventory # G0879752882I4N00

Book Description Prometheus Books, Publishers. Hardcover. Condition: Fair. A readable copy. All pages are intact, and the cover is intact. Pages can include considerable notes-in pen or highlighter-but the notes cannot obscure the text. At ThriftBooks, our motto is: Read More, Spend Less. Seller Inventory # G0879752882I5N00

4. Against the Faith (Skeptic's Bookshelf)

5. Against the Faith (The Skeptic's Bookshelf)

Book Description Prometheus, 1985. Condition: Good. A+ Customer service! Satisfaction Guaranteed! Book is in Used-Good condition. Pages and cover are clean and intact. Used items may not include supplementary materials such as CDs or access codes. May show signs of minor shelf wear and contain limited notes and highlighting. Seller Inventory # 0879752882-2-4

6. Against the Faith (Skeptic's Bookshelf)

7. Against the Faith: Essays on Deists, Skeptics and Atheists (Skeptic's Bookshelf)