Items related to Facing The River 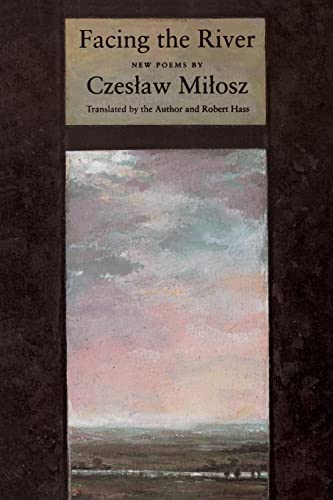 Czeslaw Milosz did not believe he would ever return to the river valley in which he grew up. But in the spring of 1989, exactly fifty years after he left, the new government of independent Lithuania welcomed him back to that magical region of his childhood. Many of the poems in Facing the River record his experiences there, where the river of the Issa Valley symbolizes the river of time as well as the river of mythology, over which one cannot step twice. This is the river Milosz faces while exploring ancient themes. He reflects upon the nature of imagination, human experience, good and evil--and celebrates the wonders of life on earth.

In these later poems, the poems of older age, this Nobel laureate takes a long look back at the catastrophic upheavals of the twentieth century; yet despite the soberness of his themes, he writes with the lightness of touch found only in the great masters.

Czeslaw Milosz was born in Szetejnie, Lithuania, in 1911. He worked with the Polish resistance movement in Warsaw during World War II and was later stationed in Paris and Washington, D.C., as a Polish cultural attaché. He defected to France in 1951, and in 1960 he accepted a position at the University of California, Berkeley. He was awarded the Nobel Prize in Literature in 1980, and was a member of the American Academy and Institute of Arts and Letters. He died in 2004.