Items related to The Life of Buffalo Bill

The Life of Buffalo Bill 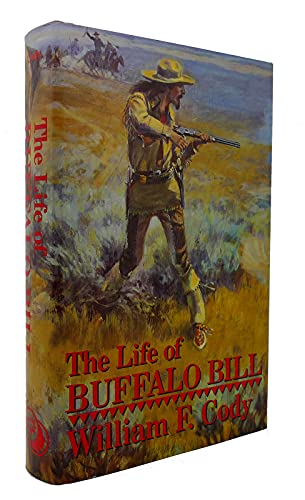 As a boy in Kansas, William Cody saw great fleets of prairie schooners on their way to Utah and California. Men walked around with knives and pistols casually tucked into their trousers. Kickapoo Indian boys taught Cody to shoot with a bow and arrows. One of Cody's cousins ran away to sea, joined the circus and became a bare-back rider. No wonder Billy became the larger-than-life Buffalo Bill - the possibilities for adventure seemed limitless in the West of the late 1800's.

Cody formed a lifelong friendship with the tall, handsome and laconic "Wild Bill" Hickok which began when, as a boy of twelve, Cody joined a wagon train heading west and Wild Bill protected him from a bully:

"'It's my business to protect that boy, or anybody else, from being unmercifully abused, kicked and cuffed, and I'll whip any man who tries it on,' said Wild Bill; 'and if you ever again lay a hand on that boy - little Billy there - I'll give you such a pounding that you won't get over it for a month of Sundays.'

Okay. This might be a slight exaggeration, but that's what makes this story such lively reading.

A bit older, Cody was engaged in winter trapping and broke his leg. His partner went for help at the nearest settlement, but that was 125 miles away. He was left alone in a rude shelter they built, and on the 12th day:

"I was awakened from a sound sleep by some one touching me upon the shoulder. I looked up and was astonished to see an Indian warrior standing at my side. His face was hideously daubed with paint, which told me more forcibly than words could have done that he was on the war-path...I could hear voices of still more outside as well as the stamping of horses. I began to think that my time had come, as the saying is, when into the cabin stepped an elderly Indian, whom I readily recognized as old Rain-in-the-Face, a Sioux chief from the vicinity of Fort Laramie...I asked him if his young men intended to kill me, and he answered, that was what they had proposed to do, but he would see what they had to say.

"The Indians then talked among themselves for a few minutes, and upon the conclusion of the consultation, old Rain-in-the-Face turned to me and gave me to understand that as I was yet a "papoose,"...they would not take my life. But one of his men, who had no fire-arms, wanted my gun and pistol. I implored old Rain-in-the-Face to be allowed to keep the weapons, or at least one of them, as I needed something with which to keep the wolves away. He replied that as his young men were out on the war path, he had induced them to spare my life; but he could no prevent them from taking what ever else they wanted."

(Rain-in-the-Face is also mentioned in Elizabeth Custer's Boots and Saddles.) Cody went on to become the youngest and fastest pony express rider around, a scout, and a soldier. He earned the nickname of "Buffalo Bill" as a hunter supplying food to the Kansas Pacific Railroad; he claims to have killed 4,280 buffalo during his 18 month employment. And of course he created the famous Wild West show that traveled around the country. But we think that there is no better way to remember him than his own image:

"Riding carelessly along, and breathing the cool and bracing autumn air which came down from the mountains, I felt as only a man can feel who is roaming over the prairies of the far west, well armed, and mounted on a fleet and gallant steed."

1. The Life of Buffalo Bill

2. The Life of Buffalo Bill