Items related to The Arab Economies in a Changing World (Peterson Institute... 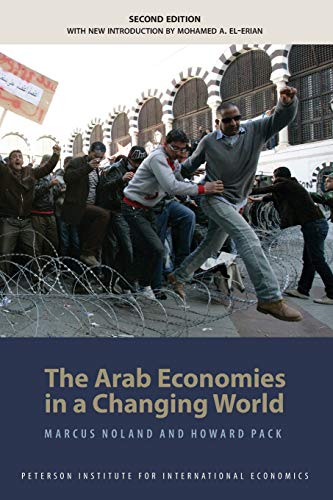 Compared to other regions of the world, the Middle East was once unique in its combination of authoritarianism and stultifying stability: No longer. Beginning in Tunisia, a wave of political upheaval has rolled across the region, reaching Egypt, Bahrain, Libya, and other countries caught between rising expectations and their antediluvian political systems, abetted by pan-Arab news channels and social networking media. This book examines the economics of the Middle East, with the aim of identifying changes to economic policy that could address at least the economic component of the challenges facing this part of the globe. The authors analyze the interaction of trade, productivity growth, and the political difficulties that may ensue as these countries move towards greater openness. Relevant comparisons are drawn from the experience of the transition economies and India on potentially successful policies and those likely to exacerbate existing problems.

This new second edition contains a new introduction from Mohamed A. El-Erian and a new postscript.

Marcus Noland, executive vice president and director of studies, has been associated with the Institute since 1985. From 2009 through 2012, he served as the Institute's deputy director. His research addresses a wide range of topics at the interstice of economics, political science, and international relations. His areas of geographical knowledge and interest include Asia and Africa where he has lived and worked, and the Middle East. In the past he has written extensively on the economies of Japan, Korea, and China, and is unique among American economists in having devoted serious scholarly effort to the problems of North Korea and the prospects for Korean unification. He won the 2000–01 Ohira Memorial Award for his book Avoiding the Apocalypse: The Future of the Two Koreas.

Howard Pack has been a professor of business and public policy and professor of economics at the Wharton School (University of Pennsylvania) since 1986. He has been a professor of management there since 1995 and was the professor of city and regional planning (1986-94). He has also taught at Swarthmore College and Yale University. He has served as a consultant for a host of World Bank projects over the past three decades and has been an adviser to the Bank's Global Development Network since 1999. He is the author or coauthor of Industrial Policy in an Era of Globalization: Lessons from Asia (2003), Productivity, Technology and Industrial Development (1987), and Structural Change and Economic Policy in Israel (1971).

[T]he only book to my knowledge that provides a comprehensive and integrated politico-economic analysis of Arab economic performance and prospects. It will fill a big need in college syllabi. (Farrukh Iqbal, World Bank)

This book fulfills a major gap in the literature on Middle Eastern economies. With universities struggling to add courses on the political economy of the Middle East, this volume will prove to be a great resource... Essential. (Choice)

This book is very valuable and extremely timely for anyone who has an interest in this topic. It is well written and provides us with an analysis that is short, yet very thorough and comprehensive. There is an extensive presentation of data and indicators, covering issues ranging from productivity and income to happiness, demographics, foreign investment and political stability. (Journal of International Economics)

1. The Arab Economies in a Changing World

2. The Arab Economies in a Changing World

3. The Arab Economies in a Changing World (Paperback or Softback)

4. The Arab Economies in a Changing World

5. Arab Economies in a Changing World

Book Description 2011. Condition: NEW. 9780881326284 This listing is a new book, a title currently in-print which we order directly and immediately from the publisher. For all enquiries, please contact Herb Tandree Philosophy Books directly - customer service is our primary goal. Seller Inventory # HTANDREE01355779

6. The Arab Economies in a Changing World: Second Edition

7. The Arab Economies in a Changing World (Peterson Institute for International Economics - Publication)

8. The Arab Economies in a Changing World

9. The Arab Economies in a Changing World (Peterson Institute for International Economics - Publication)

10. The Arab Economies in a Changing World