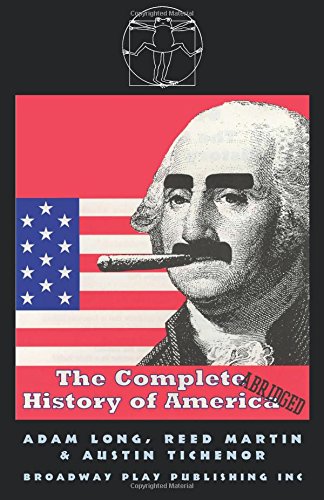 600 years of history in 6000 seconds ... history will never be the same! From Washington to Watergate, yea verily from the Bering Straits to Baghdad, from New World to New World Order — THE COMPLETE HISTORY OF AMERICA (abridged) is a ninety-minute rollercoaster ride through the glorious quagmire that is American History, reminding us that it's not the length of your history that matters — it's what you've done with it!

Long is a member of the California-born Reduced Shakespeare Company.

Reed Martin has taught film finance and marketing at a variety of institutions, including NYU's Stern School of Business and Columbia Business School, and is the former director of marketing at Cary Woods s Independent Pictures.

Tichenor is a member of the California-born Reduced Shakespeare Company.,

Just as the company's members good-naturedly bash the Bard in THE COMPLETE WORKS OF WILLIAM SHAKESPEARE (ABRIDGED), so do they cheerfully run riot over five-hundred years of our country's history. During the manic, ninety-minute program...[they] mine dozens of landmark events and trends for comic gold.... Not only do they know how to give American history an irreverent boost, they actually turn it into something accessible and alive. --Pamela Sommers, The Washington Post

THE COMPLETE HISTORY OF AMERICA interprets the past as a breathlessly paced sequence of silly vaudeville sketches, word-association games, puns and crude parodies of movie and television genres. Nothing is sacred, and many of the facts have been skewed to suggest the paranoid ravings of a particularly loony tabloid. --Stephen Holden, The New York Times

In a series of sketches that move at breakneck speed, the Reduced Shakespeare Company scampers through American history. ...This HISTORY OF AMERICA should be a required course. --Terry Byrne, The Boston Herald

1. The Complete History of America (Abridged)

2. The Complete History of America (Abridged) (Paperback or Softback)

7. The Complete History of America. Abridged