Items related to Murder in the State Capitol: The Biography of Lt. Col.... 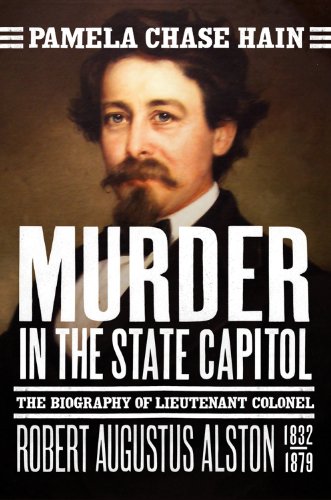 Follow the transformation of Robert Augustus Alston from a nineteenth-century slave owner and white supremacist to crusader for reform in the treatment of mostly black convicts in post-war Georgia. In his own words, Alston went to war to defend his ownership of slaves. During the Civil War, Alston served under General John Hunt Morgan initially as his adjutant and later in command of a brigade. In 1864, his strong sense of honor caused him to become disillusioned by the robberies and depredations of Morgan s troops and he reported Morgan to authorities for not investigating them. Following the Civil War, Alston became a cotton farmer using freedmen, practiced law, sold insurance, and then became an editor and owner of the Atlanta Herald. He was responsible for bringing the later famous journalist Henry Grady to the newspaper. Alston was also very active in politics and the efforts to bring the Democrats back to power. In 1878 as a state representative from DeKalb County, he became chairman of the penitentiary committee. Reporting on the deplorable conditions in the convict camps that were leased by private companies Alston thus became the first man in Georgia to expose the enormities of the convict lease system. The owners included the most powerful men in the State former governor Joseph Brown, the acting governor Alfred Colquitt, and senator and later governor John Gordon. As a result of his exposé, Alston s life was threatened. Intrigue, bribery, and murder silenced Alston just as he was poised to become one of Georgia s most influential leaders. While his efforts did not result in abolishing the system immediately, he is credited with beginning its eventual demise.

Pamela Chase Hain lives in Virginia. She received a BA from Syracuse University and an MA from Columbia University. Upon graduation, she was employed as an intelligence analyst by the Central Intelligence Agency. She authored A CONFEDERATE CHRONICLE: THE LIFE OF A CIVIL WAR SURVIVOR (University of Missouri Press, 2005).

Murder in the State Capitol: The Biography of Lieutenant Colonel RobertAugustus Alston 1832-1879 is a scholarly, in-depth profile of a trulyprincipled man - who was also a slaveholder. In his own words, Robert AugustusAlston went to war to defend his right to own slaves. During the American CivilWar, Alston served under General John Hunt Morgan, and later in command of abrigade. Alston's sense of right and wrong caused him to feel disgust at therobberies (and worse) committed by Morgan's troops; he reported Morgan to theauthorities for turning a blind eye to these depredations. After the Civil War,Alston employed freedmen to farm cotton, practiced law, sold insurance, andbecame the editor of the "Atlanta Herald". He worked to restore theDemocrats to power, but his sense of justice would ultimately be the death ofhim. As a state representative and chairman of the penitentiary committee, hespread word of the reprehensible conditions of convict camps leased by privatecompanies, exposing the dark side of the convict lease system (which at itsworst, was effectively a continuation of slavery). Alston was threatened andeventually murdered for his bravery and moral outrage. Even though Alston didnot personally end the corrupt system, his efforts are historically regarded asthe spark that led to its abolition. Murder in the State Capitol is a fascinatingread from cover to cover, and proof that human morality is not so easily castin shades of black and white. Highly recommended!