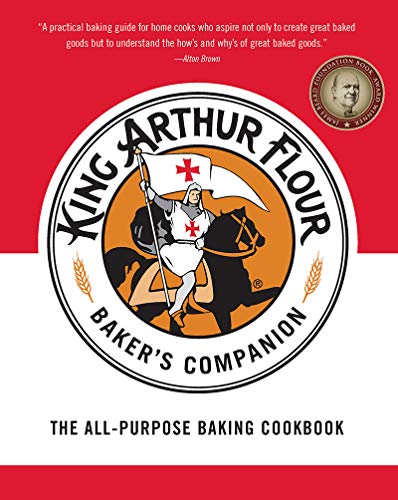 From Christmas cookies and pancakes to chocolate cake and sandwich bread, The King Arthur Flour Baker's Companion will be there to guide home bakers every step of the way.

Every kitchen comes equipped with a fundamental, dependable cookbook classic such as Joy of Cooking or Better Homes & Gardens New Cookbook. Now bakers have a modern classic of their own. From leavening, mixing, proofing, and kneading, through shaping and baking, the experts at King Arthur Flour lead you through hundreds of easy and foolproof recipes from tricky yeast breads and sourdoughs, to trendy flatbreads and crackers, to family favorites such as pancakes and waffles. They also present fried doughs, quick breads, batter breads, biscuits, quiches, cobblers and crisps, cookies, cakes, brownies, pies, tarts, and pastries. For more than 200 years King Arthur Flour has been in the business of making the highest quality key ingredient in all of baking: flour. They've done decades of experimentation and research in their famous test kitchens on how the various ingredients in baked goods behave and why. The King Arthur Flour Baker's Companion now brings you more than 350 recipes that will teach you which ingredients work together, as well as what doesn't, and why. It is this knowledge that will allow you to unleash your own creativity and to experiment in the kitchen. You'll get a complete overview of ingredients in chapters on flours, sweeteners, leavens, fats, and more. You'll find information on substitutions and variations, as well as troubleshooting advice from the pros at King Arthur. Recipes are enhanced with sidebars that share baking secrets and provide clear-step-by-step instructions, and each recipe is accompanied by a detailed nutritional analysis. Techniques are further explained with easy-to-follow illustrations by culinary illustrator Laura Hartman Maestro. The King Arthur Flour Baker's Companion is the definitive kitchen resource. Exhaustive in scope, authoritative in style, and offering clear, practical, and encouraging instruction, it is the one book you'll turn to every time you bake. Like your set of measuring cups and favorite wooden spoon, it will become an essential kitchen tool. No kitchen in America should be without a copy. Two 8-page color inserts; 150 b/w illustrations; glossary, resources, index

The King Arthur company has produced flour and other baking ingredients of high reputation for over two centuries. Similarly trustworthy, and reflecting their years of kitchen experience, The King Arthur Flour Baker's Companion offers over 400 recipes for all kinds of basic and up-to-the-minute specialties--from pancakes and waffles to muffins and quickbreads; from coffee cakes, pizzas and crackers, to hearthbreads, cakes and cookies, including two complete chocolate chip recipes, for soft and crispy kinds. This is one of those books that no baking kitchen should lack--not only for its comprehensive repertoire and recipe dependability, but for the intimate ease with which it fulfills its promise. What this means, partly, is that technical information is perfectly pitched to ensure relaxed understanding, offering neither too much nor too little detail. It's the range and quality of these baking "backstories," including, for example, how to control cookie-dough spreading while baking, plus numerous hints and shortcuts, that help make the book so valuable.

Beginning, sensibly, with a concise section on measuring--the authors "first plea" is that readers buy and use a scale--the book then treats breakfast specialties, such as Gingerbread Pancakes and Pumpkin Praline Waffles; pursues quickbreads like Maple Cornbread; cobblers including those made under both cake and pie crusts; Sesame Crisps among other crackers; and yeast breads, such as bagels, a basic White Bread 101, and an exemplary Italian Bread, among others. An entire chapter is devoted to sourdough with instructions for creating your own starter. Readers will also want to try Strawberry-Lemon Chess Pies, Chocolate Lava Cake, and Pumpkin Cheesecake. A concluding everything-you've-always-wanted-to know ingredients glossary includes explorations on flour milling; of "faux fats" and sweeteners; the use of eggs in a dough or batter, in yeast breads and custards; information on the latest in European-style cultured butters, among much else. Color photos and numerous step-by-step technical drawings provide further guidance. With an illustrated section on tools, too, both high-tech and homey, such as the flour wand, the book has it all, for new and seasoned bakers alike. --Arthur Boehm