Items related to On The Duty Of Civil Disobedience

Thoreau, Henry David On The Duty Of Civil Disobedience

On The Duty Of Civil Disobedience 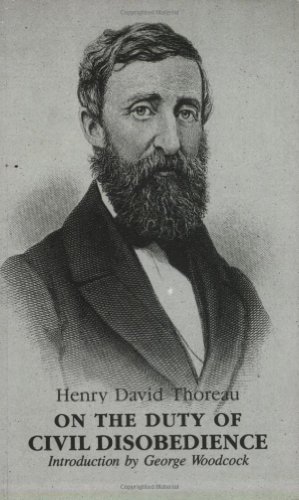 His classic polemic, with a new Introduction by George Woodcock. "Under a government which imprisons any unjustly, the true place for a just man is also a prison". [Henry David Thoreau

Philosopher, naturalist, poet and rugged individualist, Henry David Thoreau (1817-1862) has inspired generations of readers to think for themselves, to follow the dictates of their own conscience and to make an art of their lives. This representative sampling of his thought includes five of his most frequently cited and read essays: 'Civil Disobedience, ' his most powerful and influential political essay, exalts the law of conscience over civil law.

Henry David Thoreau was born in 1817 in Concord, Massachusetts. He spent time as a school teacher after attending Harvard College but was dismissed for his refusal to administer corporal punishment. In 1845, wanting to write his first book, he moved to Walden Pond and built his cabin on land owned by Ralph Waldo Emerson. It was during his time at Walden that Thoreau was imprisoned briefly for not paying taxes; this experience became the basis for his well-known essay "Civil Disobedience." He died of tuberculosis in 1862 at the age of 44.

1. On The Duty Of Civil Disobedience

2. On The Duty Of Civil Disobedience

Book Description Charles H Kerr, 1989. Condition: Good. A+ Customer service! Satisfaction Guaranteed! Book is in Used-Good condition. Pages and cover are clean and intact. Used items may not include supplementary materials such as CDs or access codes. May show signs of minor shelf wear and contain limited notes and highlighting. Seller Inventory # 0882861301-2-4