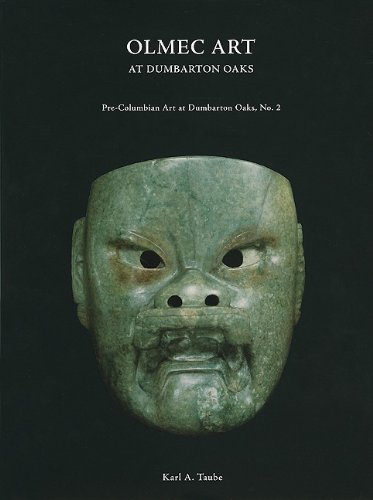 Olmec Art at Dumbarton Oaks presents the Olmec portion of the Robert Woods Bliss Collection of Pre-Columbian Art. It illustrates all thirty-nine Olmec art objects in color plates and includes many complementary and comparative black-and-white illustrations and drawings. The body of Pre-Columbian art that Robert Bliss carefully assembled over a half-century between 1912 and 1963, amplified only slightly since his death, is a remarkably significant collection. In addition to their aesthetic quality and artistic significance, the objects hold much information regarding the social worlds and religious and symbolic views of the people who made and used them before the arrival of Europeans in the New World.

This volume is the second in a series of catalogues that will treat objects in the Bliss Pre-Columbian Collection. The majority of the Olmec objects in the collection are made of jade, the most precious material for the peoples of ancient Mesoamerica from early times through the sixteenth century. Various items such as masks, statuettes, jewelry, and replicas of weapons and tools were used for ceremonial purposes and served as offerings.

Karl Taube brings his expertise on the lifeways and beliefs of ancient Mesoamerican peoples to his study of the Olmec objects in teh Bliss collection. His understanding of jade covers a broad range of knowledge from chemical compositions to geological sources to craft technology to the symbolic power of the green stone. Throughout the book the author emphasizes the role of jade as a powerful symbol of water, fertility, and particularly, of the maize plant which was the fundamental source of life and sustenance for the Olmec. The shiny green of the stone was analogous to the green growth of maize. This fundamental concept was elaborated in specific religious beliefs, many of which were continued and elaborated by later Mesoamerican peoples, such as the Maya. Karl Taube employs his substantial knowledge of Pre-Columbian cultures to explore and explicate Olmec symbolism in this catalogue.

Karl Taube brings his expertise on ancient Mesoamerican peoples to his study of the Olmec objects in the Robert Woods Bliss Collection of Pre-Columbian Art. All thirty-nine art objects (including masks, statuettes, and jewelry) are illustrated in color plates and include many complementary and comparative black-and-white illustrations and drawings. Jade objects compose the majority of the Olmec collection and throughout the book the author emphasizes the role of jade as a powerful symbol of water and fertility, and particularly, as a symbol of the maize plant, which was the fundamental source of life and sustenance for the Olmec.