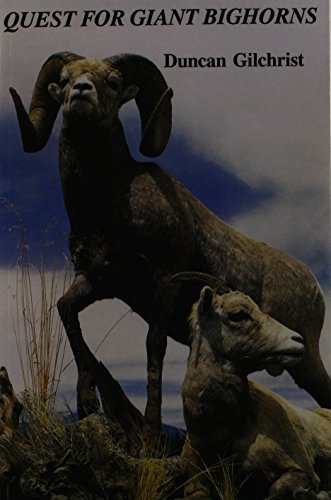 Inside Quest for Giant Bighorns you'll find a bountiful package of bighorn sheep hunting lore. Chapters cover information on every state and province with bighorn sheep including the largest taken by rifle and bow hunters. Learn how to hunt rams from the experts. Within the book's pages you will read the most comprehensive information on the evils of Pasteurella, what it takes to grow 200-point rams, how the U.S. Number One ram was taken, Montana's giant rams, and you'll learn about the Foundation for North American Wild Sheep and much more. This book contains an entire photo section of giant rams. Also included are charts and tables that will be helpful to the hunter of bighorn rams.

Duncan Gilchrist was a big game hunter and author eminently qualified to write a book such as Quest For Giant Bighorns. He began hunting as a young boy, his quest in the pursuit of big game took him from Alaska to Africa, Australia, New Zealand and British Columbia, along with the states of Arizona, New Mexico, Montana, Idaho, Washington, Wyoming, Massachusetts, New Hampshire, Maine, Missouri, Louisiana and Illinois. Before living in Montana (where he settled and remained in the Bitterroot Valley of western Montana), Duncan had spent 14 years in Alaska, where he worked as a forester and guide. As a bush pilot, he logged 6,000 hours flying a Cub. He loved hunting, and was known to spend in excess of 100 days a year hunting and photographing big game.