Items related to The World Almanac of the American Revolution

The World Almanac of the American Revolution

The World Almanac of the American Revolution 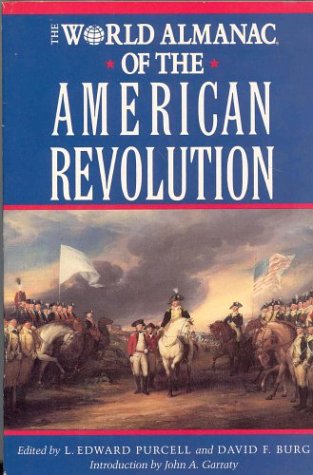 The latest in the acclaimed military history series from the publishers of The World Almanac.

No other period of American history, with the possible exception of the Civil War, rivals the Revolution in importance. Begun in 1775 as disorganized, local violence in a dispute over rights and taxes, it escalated into a full-scale armed conflict; by the time the Treaty of Paris was signed in 1783-after six years of war-a new nation had emerged. To bring it all into focus, the publishers of The World Almanac have compiled all of the fascinating details of America's War of Independence-and the period in American history that surrounded it-into a fully illustrated book in an easy-to-use almanac format. The World Almanac of the American Revolution recounts the story of America's War of Independence in all its glory, featuring:

-Chronological day-by-day entries, beginning with the first shots at Lexington Green in April 1775, all the way through to the signing of the Treaty of Paris in 783;
-Informative essays on the nature of warfare in the eighteenth century; types of weaponry employed; mercenaries who fought in the war; opposition political parties; life in the war zones; and other details which help bring the period to vivid life;
-A comprehensive section of biographies, highlighting all the important figures-military, civilian, and political-of the war.

Enhanced throughout by period illustrations, and featuring eight pages of full color, The World Almanac of the American Revolution is an invaluable reference for anyone interested in this exciting period of American History.

L. Edward Purcell has written several history books. He is the former Editor-in-Chief of the Iowa State Historical Society and lives in Maysville, Kentucky. David F. Burg, a published writer on historical subjects, is presently a lecturer at Transylvania University in Kentucky. He lives in Lexington, Kentucky. John A. Garraty is the co-editor of the recently published Reader's Encyclopedia of American History.