Items related to The History of al-Tabari Vol. 26: The Waning of the... 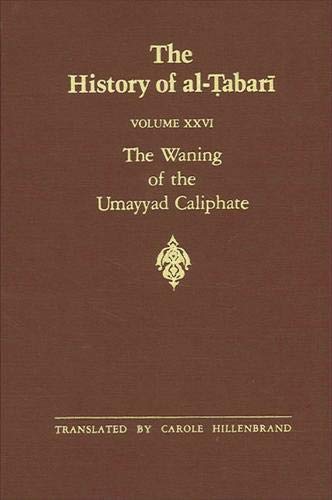 The years 738-745/121-127, which this volume covers, saw the outbreak in Syria of savage internecine struggles between prominent members of the Umayyad family, which had ruled the Islamic world since 661/41. After the death of the caliph Hisham in 743-/125, the process of decay at the center of the Umayyad power--the ruling family itself--was swift and devastating. Three Umayyad caliphs (al-Walid II, Yazid III, and Ibrahim) followed Hisham within little more than a year, and the subsequent intervention of their distant cousin Marwan b. Muhammad (the future Marwan II) could not arrest the forces of opposition that were shortly to culminate in the 'Abbasid Revolution of 750/132.

In this volume al-Tabari deals extensively with the end of Hisham's reign, providing a rich store of anecdotes on this most able of Umayyad caliphs. He also covers in depth the notorious lifestyle of al-Walid II, the libertine prince and poet, whose career has attracted much scholarly attention in recent years. Moreover, al-Tabari chronicles at great length the events of the rebellion and death of the Shi'ite pretender, Zayd b. 'Ali, at al-Kufah, as well as recording in detail the activities farther to the east, where Nasb. Sayyar was serving as the last Umayyad governor of Transoxiana and Khurasan, the very area from which the 'Abbasid Revolution was to spring. The text also contains several official letters which shed much light on Umayyad propaganda and on early Islamic epistolary style. The hindsight conferred by subsequent centuries highlights the full significance of these half-dozen years or so. Al-Tabari documents the incubation of the 'Abbasid Revolution, an event of great importance in world history, and traces the failure of the principal Shi'ite revolt of the eighth century, a debacle which was also to have serious repercussions, for it generated the foundation of Zaydi principalities in Iran and the Yemen. Yet even these major themes are secondary to the epic tale that al-Tabari unfolds of the tragic downfall of the first dynasty in Islam.