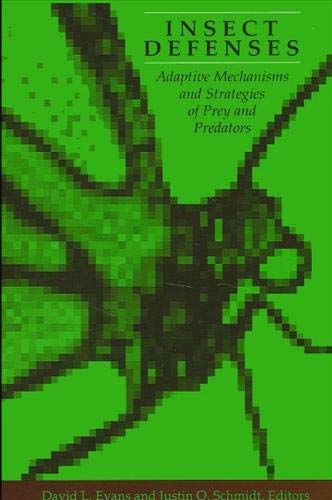 This work takes a fresh, modern approach to investigate and explain the predator and prey relationships of insects and spiders, the major terrestrial fauna on earth. Devoted to broad and in-depth analysis of arthropod defenses against predators, the book's approach is both experimentally and theoretically based with major emphasis on evolution, predator strategies and tactics, and prey defensive adaptations and behaviors.

The authors explain such topics as cryptic and aposematic coloration, the conflict between sexual and survival needs, web spider prey choice and evolution of prey counter defenses, predator-prey interactions and the origins of intelligence, bird predatory tactics, and caterpillar defense strategies. Also examined is the use of timing for fitness and survival, evolutionary gamesmanship in the predatory bat-moth relationship, colony defense by aper wasps, startle as a defense by moths, aggregation as a defense, chemicals as defenses, plant chemicals as defenses, and venoms as defenses. The authors illustrate each topic with numerous specific well-documented examples presented in a clear, readable style.

David L. Evans is a naturalist at Beaverbrook Reservation in Belmont, Massachusetts.

Justin O. Schmidt is a biologist at the Southwestern Biological Institute in Tucson, Arizona.

Insect Defenses : Adaptive Mechanisms and Strategies of Prey and Predators

Book Description Condition: Very Good. Former library book; may include library markings. Used book that is in excellent condition. May show signs of wear or have minor defects. Seller Inventory # 2587577-20

Book Description Condition: Good. A+ Customer service! Satisfaction Guaranteed! Book is in Used-Good condition. Pages and cover are clean and intact. Used items may not include supplementary materials such as CDs or access codes. May show signs of minor shelf wear and contain limited notes and highlighting. Seller Inventory # 0887068960-2-4

Insect Defenses: Adaptive Mechanisms and Strategies of Prey and Predators

Book Description Hardcover. Condition: Very Good. Item is in very good condition. If supplemental codes/CDs for textbooks are required please contact us prior to purchasing as they may be missing. Photos are stock pictures and not of the actual item. Seller Inventory # DS-0887068960-2