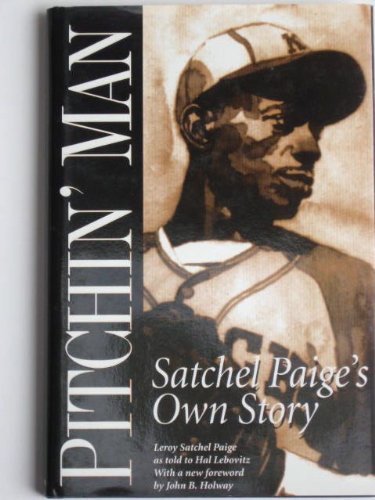 Originally published in 1948 from interviews conducted and set down by Cleveland sports writer Hal Lebovitz, this work, the autobiography of one of the most colorful and talented players to play professional baseball, is at once the story of a person and a unique and valuable document in the history of baseball.
As John Holway puts it in his preface, "there were at least three Satchel Paiges. One was the star pitcher of baseball legend. Another was the droll humorist and minstrel show end-man. The third was the least known of all, the revolutionary who helped effect a sea change in the game - and in American society as a whole. Jackie Robinson symbolized the revolution, but Satchel had been one of the crucial pioneers who helped force open the door so Jackie later could walk through."
In this book, we see the first two sides of Satchel Paige quite clearly. He was without a doubt a media star who used his newly acquired visibility to enchant and enliven professional sports and the literature that feeds off it. But, while his greatest playing days were spent outside the major leagues, the bottom line was that Paige - like many other Negro League greats - had vast reserves of talent to bring to white-dominated baseball, racking up major wins in his seasons with the Cleveland Indians.
The story of Paige the revolutionary is here as a subtext. Under his account of his rise from poverty, his life on the road with the Kansas City Monarchs, his pitching duels with black greats, the winning of a major league contract, and his joining the Indians, there is a serious story that in many ways parallels any struggle to succeed against a battery of odds. That Paige retained his sense of humor and his ability to charm, is a testament to the man whose nickname became so thoroughly a household word and whose record established him as one of the all-time greats of baseball.

About the Author:
Satchel Paige was born on July 07, 1906 in Mobile Alabama. His Parents were John & Lulu Paige. On July 07, 1948 He was signed by Cleveland Indians and played there for two years. On August 03, Satchel started his first Major League game. On August 08, he pitched his first shutout. In 1951 Paige sign with the St Louis Browns and pitched there for three years. In 1956 he played for the minor league, Miami Marlins and stayed for three years. On August 09, 1971 he was inducted into Baseball’s Hall of Fame in Cooperstown New York. June 08, 1986 LeRoy Robert “Satchel” Paige died in Kansas City, MO. The Collaborator, Hal Lebovitz, was born on September 11, 1916 in Cleveland Ohio. He graduated from Western Reserve. Hal was a sportswriter and columnist and a great sports fan. His first job was for the Cleveland News in 1942. He soon was covering the Cleveland Browns and Cleveland Indians. In 1960 he moved to The Plain Dealer and was their Sports Editor from 1964 to 1982. He coached and officiated baseball, basketball, and football. He even traveled with the Harlem Globetrotters and refereed their games. Lebovitz had great knowledge of sports rules. He wrote a popular column, "Ask Hal the Referee." He won many awards for his work and in the year 2000, he was inducted into the National Baseball Hall of Fame and Museum. Hal Lebovitz died on October 18, 2005 age 89.

Shipping: US$ 24.15
From United Kingdom to U.S.A.
Destination, rates & speeds