Items related to Family Questions: Reflections on the American Social... 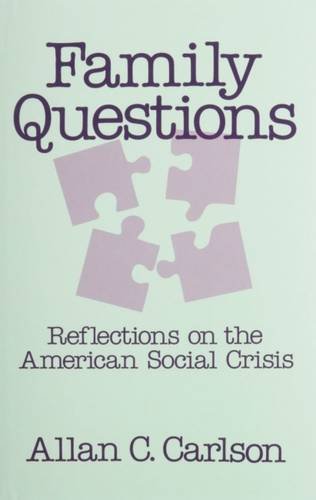 How is it that the United States, long considered one of the most family-centered countries, has experienced a social upheaval of the last 25 years, amounting to an unraveling of its basic social order? And why is it that ideologues of the 1960s and the early 1970s found such common cause in their opposition to the suburban American family?

Drawing upon evidence from the fields of history, sociology, psychology, economics, and biology, Allan Carlson offers a number of provocative explanations. He denies that the family is merely changing, and shows how recent trends in marriage, divorce, illegitimacy, and fertility are interconnected, and so pervasive as to warrant the term "crisis." He explores the relationship of the family to the American economy, emphasizing the critical importance of strong families to effective functioning of the market system, as well as the pressures that capitalism brings upon family structure. He analyzes the particular importance of gender roles and the historic "family wage" system to social stability and economic progress, and he describes the consequences of their decay. Finally, he emphasizes the fundamental ethical conflict between the family and the state, and shows how governmental efforts to preserve the family have commonly had perverse results.

In his search for solutions to the American crisis in the family, Carlson borrows from a number of traditions. From conservatism, he adopts an unswerving commitment to natural law, and to the father-mother-child unit that constitutes the human family form. From recent feminist scholarship, he applies insights concerning the central importance of gender roles in social and economic structure and change. And from socialist and Marxist critics of the family, he gleans and critically examines the evidence of capitalism's troubled alliance with the traditional family as well as the corrosive effects on the family of the partial American commitment to the welfare state.

Allan C. Carlson  is president emeritus of the Howard Center for Family, Religion, and Society in Rockford, Illinois and was distinguished visiting professor of history and politics at Hillsdale College.

“As viewed by Carlson, a specialist in modern history, the family in America has reached a crisis point because of increasing divorce and out-of-wedlock births, child abuse, juvenile delinquency and youth suicide, and declining fertility... This book explores a series of questions related to the contemporary family... Of interest to historians, social scientists/planners, and students at the upper-division undergraduate level and above.”