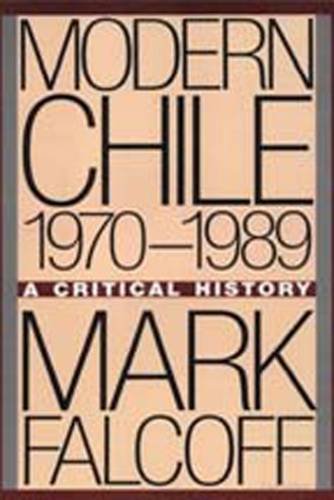 Few dispute that a major turning point in the history of present-day Chile commenced with the election in 1970 of a Marxist physician, Salvador Allende. What followed were three years that shook South America, if not the world. Land reform, factory expropriation, the politicization of a sector of the armed forces, curriculum reform in education, each in their turn led to a hardening of political fault lines, and created the basis for the overthrow of the Allende regime.

This work, by one of the foremost analysts of modern Chile, features an interview with an earlier president of that beleaguered country, Eduardo Frei. In what is likely to be viewed as the most authoritative statement to date on U.S.Chile relationships during this stormy period, Falcoff debunks the myth of a CIA-inspired overthrow of the democratic forces, placing responsibility on Allende's failure to obtain or even seek a decisive electoral mandate, on a governing coalition internally inconsistent and frequently at war with its constituent elements, on an economic policy that polarized supporters and enemies, and ultimately on the need to turn to the military for the stability that its policy failures could not achieve.

The final chapter, on the assumption to power and political changes rendered by the present ruler, General Augusto Pinochet Ugarte, indicates that the problems of Chile are not attributable to any single ruler or party. Falcoff indicates that core problems in Chile, from capital formation to the search for diversification, were exemplified in cultural, moral, and spiritual values between the Frei and Allende epochs. The prolonged Pinochet regime, for Falcoff, has postponed settlement of the major issues raised by the democratic era: equality and growth, legality and legitimacy. The costs of democratic order remain for Chileans to confront and resolve.

Mark Falcoff is a visiting fellow at the Council on Foreign Relations, permanent senior fellow at the American Enterprise Institute for Public Policy Research in Washington, D.C., and a former national fellow at the Hoover Institution on War, Revolution, and Peace, Stanford University. He has taught history at the University of Oregon, is co-editor otPeron: Argentina in Depression and War, 1930-1943, and has written widely on Latin America for Commentary.

“This is a book about Chile, the Allende years, the violent overthrow by General Pinochet, and much more. Falcoff spent ten years gathering and analyzing material while serving as a fellow at the Council on Foreign Relations, the American Enterprise Institute, and the Hoover institution. The result may be the most detailed and authoritative statement yet on US-Chilean relations during those critical years.”