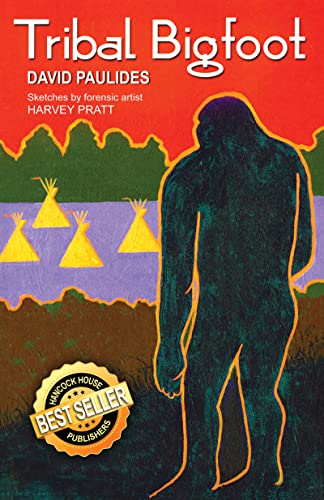 Further research into Middle America bigfoot sightings indicates a strong connection between bigfoot and Native Americans, and witness descriptions show a strong human likeness. The latest research from the author of the groundbreaking The Hoopa Project: Bigfoot Encounters in California named 2008 Bigfoot Book of the Year by Cryptomundo.com. Dave Paulides brings his law-enforcement investigative and analytical skills to an expanded area of research: the counties in Northern California that have reported the greatest numbers of bigfoot occurrences, and beyond to Minnesota and Oklahoma. Gaining access to many people who have never discussed their bigfoot experiences publicly before now, the author obtains intriguing details that broaden our perception of the elusive creature; and his subsequent analysis leads to the discovery of a strong and consistent link between bigfoot and the Native American community. The expert interview and artistic skills of forensic artist Harvey Pratt help to define the creatures described by the witnesses - - once again with astonishing and illuminating results. The presentation of startling new forensic evidence indicates that there truly is an as-yet-unidentified primate living in the wilds of North America, and the author hints at new data on the horizon that will finally provide the tantalizing truth about the existence of bigfoot in North America.

Dave Paulides holds two degrees from the University of San Francisco, and has a professional background that includes twenty years in law enforcement and senior executive positions in the technology sector. A boyhood camping experience with his father in the late 1960s sparked his interest in Bigfoot. In 2004 he formed North America Bigfoot Search where his investigative and analytical experience were invaluable in researching Bigfoot sightings. He spent two years living among the Hoopa tribal members, listening to and recording their Bigfoot stories. The Hoopa Project is his first book, based upon his experiences in the Bluff Creek area of Northern California. Harvey Pratt was educated at the University of Central Oklahoma and Oklahoma State University, and the Federal Bureau of Investigation. During his forty-year career in law enforcement he was involved in many high-profile investigations, including the Green River killer, BTK killer, Ted Bundy, the I-5 killer, and the Murrah Federal Building bombing. Harvey is a highly skilled forensic sketch artist specializing in witness descriptive drawing, skull tracing, age progression, soft tissue reconstruction, and photo restoration. Harvey is a member of the Cheyenne and Arapaho Tribes and is recognized as one of the traditional Cheyenne Peace Chiefs.

In his book, 'Tribal Bigfoot,' Dave Paulides switches the light on to a subject that has too long been in the dark. With an emphasis on Native American connections to the Sasquatch, Paulides brings back the art of the eyewitness interview that has, for so long, been neglected in favor of scientific testimonials that confuse the reader with the complex jargon. This book contains no fuzzy photos, but instead contains the rendered images of Harvey Pratt, a renowned forensic artist...who rendered them from the two greatest cameras ever built, the human eye and mind. The combined talents of Paulides and Pratt result in the captured events in the lives of so many eyewitnesses that an understanding of this complex subject develops that is compelling. Paulides is a prodigious note taker that rarely misses a thing in the huge amount of footwork that he has done for this work. The reader can actually accompany Paulides to the many and varied places that he has traveled and feel that the experience is theirs as well. All the testimony is accompanied by legal documents that are signed by the eyewitnesses themselves, and all sketches and artwork are signed off...that they are accurate representations of what was seen.
This is a work that I am especially appreciative of because it has not filtered through the bad versions of the Patterson-Gimlin film, but stands alone on its own merit. I encourage anyone that is interested in the subject to, by all means, get themselves a copy of 'Tribal Bigfoot' by Dave Paulides. This book will illuminate the dark places on this subject matter and make the whole subject more easily understandable.