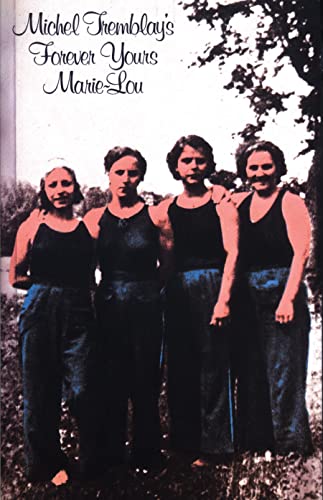 This second revised edition of Forever Yours, Marie-Lou, which played at the 1990 Stratford Festival, is John Van Burek and Bill Glassco’s new translation of Michel Tremblay’s original French text.

Michel Tremblay
One of the most produced and the most prominent playwrights in the history of Canadian theatre, Michel Tremblay has received countless prestigious honours and accolades. His dramatic, literary and autobiographical works have long enjoyed remarkable international popularity, including translations of his plays that have achieved huge success in Europe, the Americas and the Middle East.

John Van Burek
John Van Burek has been a practising theatre artist for over twenty years, in both French and English, throughout Canada. He has also worked in the fields of opera, film and television. He is also one of Canada’s leading translators for theatre, most notably of Michel Tremblay’s plays, including Les Belles-Soeurs (Talonbooks). Mr. Van Burek has received several awards and citations for his work, including the Toronto Drama Bench Award for Distinguished Contribution to the Canadian Theatre.

Bill Glassco
Born in Quebec, William Grant ( Bill”) Glassco was a Canadian theatre director, producer and founder of Toronto’s Tarragon Theatre. He then became the artistic director of the CentreStage Theatre Company which merged, in 1988, with the Toronto Free Theatre to become CanStage. In 1982, he was made an Officer of the Order of Canada.