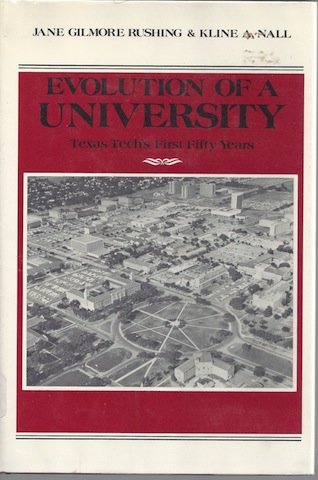 TEXAS TECHNOLOGICAL COLLEGE, beginning its rise among the sage brush and tumble weeds on 2,000 dusty acres at Lubbock's far outskirts in the mid 1920's, looked like an impossible dream. Its birth had come from a political storm that involved a governor's impeachment, the Ku Klux Klan, and the hopes of West Texans for an institution of higher learning that would serve the region's peculiar needs. Much of its life has been marked by political maneuvering and sectional power struggles as West Texas fought to overcome a seeming sectional prejudice by the rest of the state and struggled with its own feelings of inferiority.

This penetrating look at Texas Tech University, reveals a history typical of many state colleges and universities the country over that have grown and changed in response to the needs of the people they serve. Too frank in their appraisal to win official sponsorship, the authors show themselves to be neither unloving critics nor uncritical lovers.

No facet of Tech's life is neglected, as the narrative recreates the excitement of student activities and Red Raider athletics. Former students will find in these pages a call to nostalgia. But the authors, in their examination of Tech's past and contemplation of its future, offer a message also for parents, educators, and political leaders across the country.

Tracing the social and economic parallels of Tech and the South Plains region, Nall and Rushing also have treated the singular relationship between "town and gown." Lubbock and the college, in a sense, grew up together, one maturing into a city while the other became a university. Texas Tech University today is a far cry from the regional school to which farm boys bent- on studying agriculture brought milk cows from home to help them pay their way. From much of its struggle, the institution has emerged victorious.