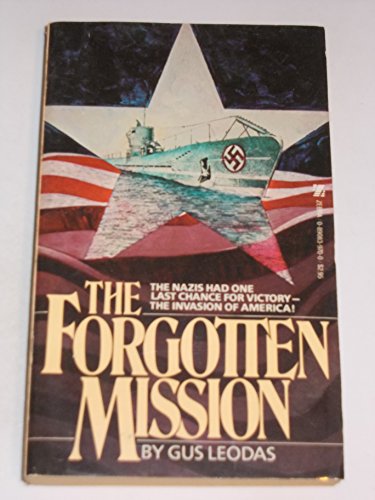 What was the deadly secret of Shuller's Land? The last crop on the Long Island farm was planted in 1942, the year the land died from the horror of that one long night. Decades later, the abandoned weathered barn that leaned precariously from old age still waited for a strong wind to complete the collapse before someone discovered its horrible secret. Investigator Mitchell Pappas found artifacts at the farm belonging to World War II German spies. So began his mission to unravel the mystery of the forgotten farm and the disappearance of the spies and the farmer's teenage daughter, Melissa.

This is the latest version of The Forgotten Mission, copyrighted in 2012, republished through an Amazon.com book division.  The original publisher was Kensington Publishing, in New York City.   See  more on the Kindle version.

NOTE:  I was intrigued by an actual event of four German spies landing on Long Island in 1942 whose mission was to blow up the Hell's Gate Bridge and the Consolidated Edison utilities along the East River.  They were caught  before doing damage.  One turned himself over to the FBI.  President Roosevelt ordered three to be executed as spies.  The fourth, who informed the FBI, was spared and sent to a POW camp in Alabama.  After the war, he returned home.
The premise of The Forgotten Mission challenged me with the questions - What if four other spies landed later who were never caught and never returned to Germany after the war?  What happened to them and to the farmer's teenage daughter, Melissa?
Two persons, who probably had nothing better to do, told me they read the book twice.

An Amazon Best Seller Author of The Forgotten Mission, Unsafe Harbor, Huntress, A Sorority of Angels and The Letter from Magda. Unsafe Harbor was selected as an award finalist by ForeWord Magazine's Book of the Year Awards. His background includes owning an advertising service and a film production company in New York City. A member of Mystery Writers of America, International Thriller Writers, and Directors Guild of America, he lives on Long Island.
So far, AMAZON BEST SELLERS include A Sorority of Angels, The Forgotten Mission and Unsafe Harbor.

Book Description Kensington Publishing Corporation. Mass Market Paperback. Condition: Good. A copy that has been read, but remains in clean condition. All pages are intact, and the cover is intact. The spine may show signs of wear. Pages can include limited notes and highlighting, and the copy can include previous owner inscriptions. At ThriftBooks, our motto is: Read More, Spend Less. Seller Inventory # G0890839700I3N00

Book Description Zebra Books (Mass Market), 1982. Paperback. Condition: Acceptable. Paperback We are a family business, and your satisfaction is our goal!. Seller Inventory # 47444