Items related to The Early Writings of Alan Watts

The Early Writings of Alan Watts

The Early Writings of Alan Watts 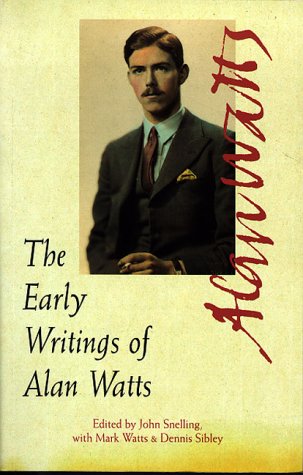 Discusses Zen Buddhism, the influence of Buddhism on Japanese art, Buddhism in the modern world, and the nature of the mind, the self, and reality

In 1936, when he was only 21, Watts became editor of the journal Buddhism in England. In its pages, he advised readers to adopt a Zen attitude and take things as they come. He urged a "not only but also" approach to life, recognizing that opposites can't exist without each other. In antipuritanical essays, he pleaded for bringing sexual enjoyment and a sense of humor back into spirituality. If Watts's youthful writings are often stilted and lack the inner voice of authority that made his later works so popular, they nevertheless contain much of interest to students of Eastern wisdom. His absolute pacifism, spelled out uncompromisingly in one essay, led him to flee London for the U.S. His Jungian interpretations breathe new meaning into the symbols of the lotus, wind, water and fire. A forthcoming volume will cover writings from this period that ran in other journals.
Copyright 1987 Reed Business Information, Inc.

Drawn largely from the journal Watts called Buddhism In England , these early pieces show the startling precocity of a vigorous and questing mind launching on a life-long career as confident interpreter of Asian thought to the West. Not a strict scholar or linguist, Watts shows that already he was primarily concerned to interpret, apply, and live, in his own idiosyncratic way, the teachings of Zen and Taoism. Though much of what he says here, he said later more articulately, the book does represent a useful source. Helpful, if perhaps uncritical, introductory prefaces to each section are provided by editor Snelling. Paul E. Muller-Ortega, Michigan State Univ., East Lansing
Copyright 1987 Reed Business Information, Inc.

1. The Early Writings of Alan Watts

2. The Early Writings of Alan Watts

Book Description Celestial Arts 1996-05-01, 1996. Paperback. Condition: Good. Item is in good condition. Some moderate creases and wear. This item may not come with CDs or additional parts including access codes for textbooks. Might be an ex-library copy and contain writing/highlighting. Seller Inventory # DS-0890877947-3

3. The Early Writings of Alan Watts

5. The Early Writings of Alan Watts

6. The Early Writings of Alan Watts

7. The Early Writings of Alan Watts

Book Description Celestial Arts, 1996. Condition: Good. A+ Customer service! Satisfaction Guaranteed! Book is in Used-Good condition. Pages and cover are clean and intact. Used items may not include supplementary materials such as CDs or access codes. May show signs of minor shelf wear and contain limited notes and highlighting. Seller Inventory # 0890877947-2-4

8. The Early Writings of Alan Watts

Book Description Celestial Arts, 1987. Paperback. Condition: Very Good. First Edition. A nearly new copy, square and tight with no creases or splits. Contents fresh and clean, not showing any pen-marks. Not from a library so no such stamps or labels. Thus a tidy book in very presentable condition. Seller Inventory # 088058

Shipping: US$ 14.31
From United Kingdom to U.S.A.
Destination, rates & speeds