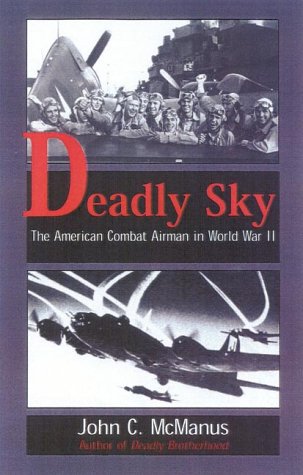 Using the same approach as in Deadly Brotherhood, his previous book on combat soldiers and marines, author McManus examines the dangerous world of the American combat airmen in World War II.

John C. McManus is the author of The Dead and Those About to Die, September Hope, and Grunts. He earned a PhD in American and Military History from the University of Tennessee, where he served as Assistant Director of the Center for the Study of War and Society and was a Normandy Scholar. As a leading authority on the Normandy invasion, he holds a Cantigny First Division Museum Fellowship. He is currently Curator’s Professor of U.S. Military History at Missouri University of Science and Technology, where he teaches a variety of courses, including one on World War II and another on the Modern American Combat Experience. He also serves as the official historian for the United States Army’s Seventh Infantry Regiment.

“From the training camps to the combat missions, this is war from the perspective of the young Americans who lived through it: the pilots, the bombardiers, the navigators, and the gunners of all the combat services in both Europe and in the Pacific. It is an engaging and vivid portrayal of war in the skies from 1941 to 1945.”—Craig L. Symonds, Author of The Battle of Midway and Neptune: The Allied Invasion of Europe and the D-Day Landings

“These extraordinary eyewitness accounts put a human face on the bombing campaign against Nazi Germany, and tell the story of its savagely contested battles with rare power and empathy. McManus is a master of the art of oral history and one of the outstanding historians of World War II.”—Donald L. Miller, Author of Masters of the Air: America's Bomber Boys Who Fought the Air War Against Nazi Germany

“Using their own words, a vivid, thematic report on the personalities, thoughts, and experiences of American airmen in combat during World War II. An important book and an exciting read.”—Gerald Astor, Author of The Mighty Eighth

“[Deadly Sky] is one of the most compelling books about men at war that I have ever read. It combines superb analysis of the World War II air war around the world with riveting, often heartbreaking eyewitness testimony from the participants...A truly great read.”—Tom Fleming, Author of The Great Divide

“Especially moving are the words of the men who struggled to make sense of the horrors of war. They were not simply extensions of the war effort but fiercely independent men who thought seriously about what they were doing.”—Smithsonian Air and Space