Items related to Siege of the Villa Lipp

Siege of the Villa Lipp 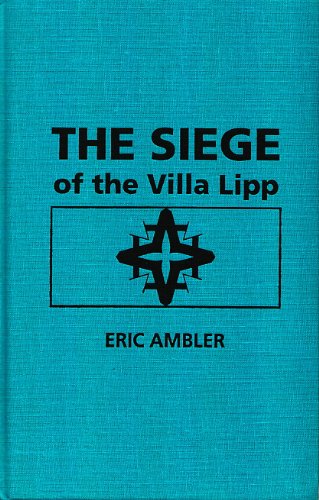 In the shadowy areas of international law criminals work hard at figuring loopholes. One such wheelerdealer is Paul Firman. He pursues his own ends in a quiet, unobtrusive way. Why would anyone want to bother about him? But he is unaware that an obsessive academician, Professor Krom, has stumbled on Firman's activities and is determined to expose him. Two of Krom's colleagues are on hand as witnesses as Krom prepares to confront Firman. But none have bargained with a third party threatening to put a permanent stop to the encounter. The booby-trapped grounds of the Mediterranean Villa Lipp, a hovering motor cruiser, a sudden attack--Krom is prepared for none of these. But Firman, always cool and self-possessed, responds with force and decision, and in the end pulls Krom's chestnuts out of the fire.

ERIC AMBLER (1909-1998) is widely regarded as the greatest writer of suspense stories in the English language, and as the inventor of the modern political thriller. His first novel was published in 1936 and he rapidly established a reputation as a thriller writer of extraordinary depth and originality. Ambler was described by John Le Carre as 'the source on which we all draw'. He was also an Oscar-nominated Hollywood scriptwriter.

1. Siege of the Villa Lipp

Book Description Amereon Ltd, 1977. Condition: Good. Reprint. Ships from the UK. Former Library book. Shows some signs of wear, and may have some markings on the inside. Seller Inventory # GRP97917200

3. The Siege of Villa Lipp

4. Siege of the Villa Lipp

Book Description Amereon Ltd, 1977. Condition: Good. A+ Customer service! Satisfaction Guaranteed! Book is in Used-Good condition. Pages and cover are clean and intact. Used items may not include supplementary materials such as CDs or access codes. May show signs of minor shelf wear and contain limited notes and highlighting. Seller Inventory # 0891904654-2-4

5. Siege of the Villa Lipp

6. Siege of the Villa Lipp

7. Siege of the Villa Lipp