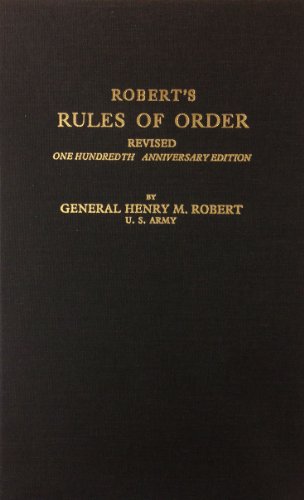 The 1990, ninth edition, of Robert€™s Rules of Order Newly Revised is the only currently authoritative volume to contain the complete Robert€™s Rules of Order subject matter. It has been totally reset and redesigned for easier use. This ninth edition supersedes all previous editions and automatically becomes the parliamentary authority in organizations whose bylaws prescribe Robert€™s Rules of Order.This edition has been updated to address common inquiries, and it incorporates new rules, interpretations, and procedures made necessary by the evolution of parliamentary procedure. Among the more important areas of revision are: more modern and appropriate usage is given for the chair€™s invitation to members to speak in debate or offer secondary motions after stating the question on a motion the rule relating to the power of replacement of members on committees by the appointing authority is clarified formal recognition is given to the practice of sending a sug

Henry M. Robert III is co-author of Robert's Rules of Order Newly Revised, 100th Edition, the current and official manual adopted by most organizations to govern their meetings.