Items related to Pakistan―Violence vs. Stability: A National... 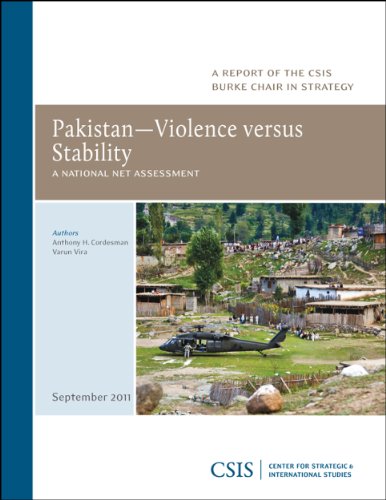 Pakistan is passing through one of the most dangerous periods in its history. An assessment of the growing patterns of violence and instability indicate that it may be approaching a perfect storm of threats, including rising extremism, a failing economy, chronic underdevelopment, and an intensifying war, resulting in unprecedented political, economic, and social turmoil.

The Burke Chair at CSIS has developed a net assessment of these threats and areas of internal violence. It carries out this assessment within the broader context of the religious, ideological, ethnic, sectarian, and tribal causes at work, along with Pakistan's problems in ideology, politics, governance, economics, and demographics. The assessment shows that the patterns of violence in Pakistan have serious implications for Pakistan's future, for regional stability, and for core U.S. interests. Pakistan remains a central node in global terrorism, continues to pursue its own agenda in Afghanistan, and as a pivotal regional player has the potential to be either a disruptive force or a source of stability in South and Central Asia.

Pakistan's instability does not have one center of gravity; it has many. Various localized conflicts once insulated from one another have converged, but there are many movements and tensions beyond Al Qa ida and the Taliban that feed violence and extremism in Pakistan and grow out of a government that has failed to meet the needs of its people. Those failures interact with a growing wave of Sunni-Deobandi radicalization that manifests itself in anti-state violence and sectarian intolerance, which has gradually perverted the Pakistani social fabric, intimidating secularism to the benefit of militant Islam. Only Pakistan can save Pakistan. This can never happen as long as its leadership elite pursue policies that fail the nation and its people and are likely to allow violence to grow to levels where Pakistan could become a failed state.

Anthony H. Cordesman holds the Arleigh Burke Chair in Strategy at CSIS. Varun Vira is a reseacher with the Burke Chair at CSIS.