Items related to The Almanac of American Politics, 2004

The Almanac of American Politics, 2004 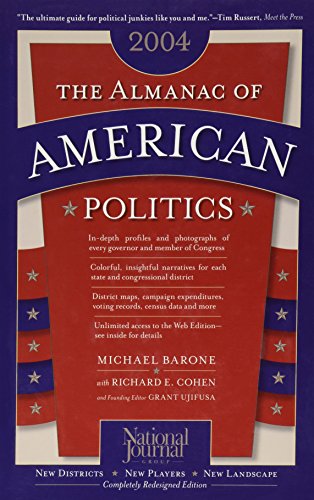 "September 11 changed everything." How often have we heard or thought that since that awful morning? Yet for 14 months, September 11 seemed to have changed very little in American politics; the nation's electorate still seemed split evenly between the parties, divided along cultural lines. But as the results of the 2002 elections came in, it became clear that something had indeed changed, as Republicans made down-the-line gains from the statehouses to Capitol Hill.

The Republican romp is only one of the topics treated in the 2004 edition of "the bible of American politics." In his introduction to this new edition, Michael Barone describes how and why the nation came to elect Republican majorities in both the House of Representatives and Senate in 2002—and what it will mean for politics and governance. Barone's introduction leads off the completely redesigned Almanac of American Politics 2004, which contains all the information journalists, politicians, academics, and citizens have come to expect from the nation's leading political reference work. With insightful and colorful profiles of every governor and every member of Congress as well as updated narrative profiles filled with economic, social, historical and political background information about all 50 states and 435 House districts, The Almanac of American Politics remains the indispensable guide to the American political scene. The 2004 edition also includes a look at how redistricting will alter American politics over the course of the next decade; photographs of all 535 members of Congress and the 50 governors; and voting records on important legislation, including congressional vote ratings by National Journal and a dozen influential interest groups.

More Feature of the 2004 Almanac

* 2002 election results for each member of Congress

* Presidential results by state and by congressional district

Michael Barone, senior writer at U.S. News & World Report, is a regular panelist on The McLaughlin Group and is a Fox News Channel contributor.
Richard E. Cohen has 26 years of experience covering Captiol Hill as National Journal's congressional correspondent. He is the 1990 winner of the prestigious Everett McKinely Dirksen Award for distringuished reporting on Congress and the author of several books about Congress, including a 1999 biography of former Ways and Means Chairman Dan Rostenkowski.