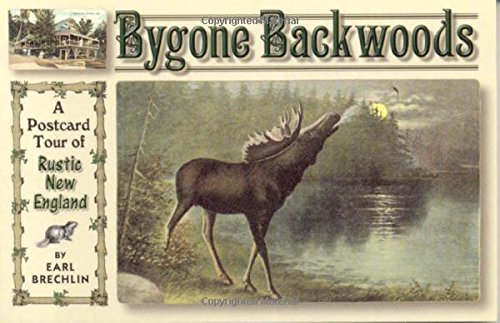 The fourth volume in Earl Brechlin's successful Bygone... series of old-postcard books focuses on how our grandparents and great-grandparents had fun in the outdoors: hiking, canoeing, visiting parks and natural wonders, communing with nature at remote mountain resorts, and roughing it at fishing and hunting camps. In addition, some of these old postcards show the serious business of the backcountry: logging camps, early dams, the rail lines that pierced the wilderness. Short, informative descriptions accompany the 100 antique postcard views, which cover all of New England, from northern Maine to Rhode Island.

Caption for postcard of Boston Light

"Like so many other points of interest in Boston, Boston Harbor Light was the "first of its kind" in North America. A bill to build the lighthouse was passed in July 1715. A stone tower was built on Little Brewster Island, and the beacon was lit for the first time on September 14, 1716. A tax of a penny per ton on all cargo transiting the harbor paid for its construction. A cannon served for the fog signal. During the Revolution, the lighthouse was burned or destroyed and then repaired several times. It was rebuilt to a height of 75 feet in 1783, and raised to the existing height of 89 feet (show here) in 1859. The second-order Fresnel lens installed at that time is still in use today. On April 16, 1998, Boston Harbor Light was the last in the nation to be automated."

Book Description Down East Books, 2005. Condition: Good. A+ Customer service! Satisfaction Guaranteed! Book is in Used-Good condition. Pages and cover are clean and intact. Used items may not include supplementary materials such as CDs or access codes. May show signs of minor shelf wear and contain limited notes and highlighting. Seller Inventory # 0892726369-2-4