Items related to A Spy for the Redeemer: An Owen Archer Mystery (Owen... 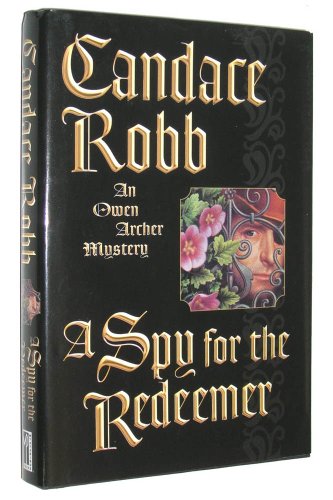 When Owen Archer, ex-soldier and spy, finds his plans to obtain a safe passage to Wales thwarted and the Archbishop of York orders his immediate return, he is caught in the midst of a country divided by war and in the clutches of a rebel leader.

Candace Robb has read and researched medieval history for many years, having studied for a Ph.D in Medieval and Anglo-Saxon Literature. She is the author of nine Owen Archer novels and three Margaret Kerr Mysteries.

The seventh Archer mystery from medieval scholar Robb (The Nun's Tale, etc.) presents an absorbing picture of 14th-century Britain, which is rife with intrigue, rebellion and murder. As Welshmen chafe under English rule, ex-soldier Owen Archer (who won his surname from his skill with a bow) is caught between family obligations in York and his mandate to find whoever hanged Cynog, an eminent but also enigmatic stonemason, who had been working on the tomb of Mistress Archer's late father. Having lost an eye in battle, Owen is reduced to conducting religious tours and investigations for clerics and other local powerbrokers. The scenes change quickly and often between St. David's shrine in Wales and Archer's home in north England, where his impatient wife, Lucie, an apothecary, and their restless son await his return. Wife and son both question Owen's loyalty to England when he's linked to the cause of Wales's legendary redeemer, Owain Lawgoch. Rumor has it that Owain has come from France to free his homeland. Strong faith and fear of God permeate all aspects of people's lives in this dour tale of misery and deprivation. Medievalists will enjoy such raw descriptions as that of the hero's visit to the high sheriff's castle, replete with floggings, acrid smells and streams polluted by offal and waste, but others less familiar with Welsh history and place names may find themselves lost in the maze. Maps, an author's note on the historical background and a glossary provide both interest and guidance. (Apr. 25)Betrayed: First Chapter of Margaret Kerr of Perth.
Copyright 2002 Cahners Business Information, Inc.