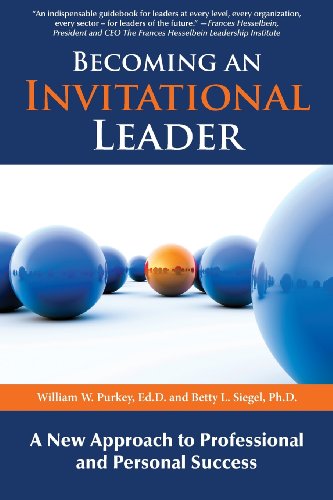 William Purkey and Betty Siegel have written much more than a guidebook to becoming a healthier and more effective leader. The book is radical and profound in its compelling argument that it is time for people in positions of authority to forge a new kind of relationship with others based on dialogue, respect and collaboration. What separates this text from others in its field and makes for such interesting and enjoyable reading are the countless quotes, metaphors and specific examples of highly successful leaders who have practiced invitational leadership. John Dewey, Thomas Jefferson, F.W. Woolworth are just a few leaders mentioned who held a strong belief in the importance of respect in all human interaction as well as faith in the self-directing powers of the individual. This insightful text is long overdue in an age of "might makes right" and contains great wisdom in promoting solid values found in various democratic and spiritual organizations. Supervisors and coaches, CEO's and shop stewards, managers and parents, anyone and everyone who deals with others, take notice. This is a truly inspirational book in its invitation for all people to join together in a shared vision of promise and greatness.

William Watson Purkey, Ed.D. began his educational career as a public school teacher, rising to a fully tenured position at the University of Florida, and finally as Professor Emeritus of Counselor Education at the University of North Carolina-Greensboro. His passion for teaching and leadership has earned him various awards of excellence in his field. He is also the co-founder of The International Alliance for Invitational Education. A noted writer, researcher, speaker, and leader, Purkey has authored nearly 100 articles and more than a dozen books. Dr. Betty Siegel, inducted into the 1999 Atlanta Business Hall of Fame and named for the third time to Georgia Trend magazine s list of 100 Most Powerful and Influential Georgians, served as president of Kennesaw State University from 1981 to 2000, the longest serving female president among our nation's public universities. She is also the first woman to hold this distinguished position in the Georgia University System.

Finally, a new, fresh look at the dynamics of leadership (or dynamic leadership). Take up Siegel and Purkey s invitation to experience your power in a non-confrontational environment. --Gail Evans, Former Executive Vice President of CNN Newsgroups and author if Play like a Man, Win Like a Woman