Items related to The Russian's World: Life and Language, Fourth... 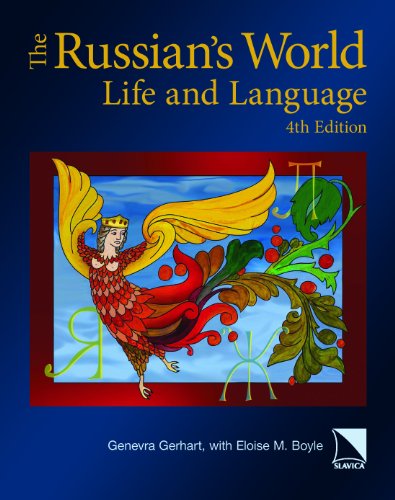 THE RUSSIAN'S WORLD is a unique achievement, which presents carefully selected portions of the Russian lexicon within a broad cultural context. It explains aspects of Russian culture and of Russian life (in short, the Russian's world) in a lively and engaging manner and contains information that is of value to students of Russian language, literature, history, and culture of all levels, from those just past the beginner stage to the most advanced, and with every interest, be it nineteenth-century literature or contemporary society. Excerpt from the Special Achievement Award conferred upon the second edition of THE RUSSIAN'S WORLD by the Publications Committee of the American Association of Teachers of Slavic and East European Languages (AATSEEL) in December 1993.

Genevra Gerhart writes: I graduated in 1950 with a 'linguistic' major in Russian and thereafter spent an additional year and a half completing the Russian course at L' École des langues orientales vivantes in Paris, France. (More Russian was actually learned at home from my landlady, Mme. Tchebotarevskiy. Monsieur T. was a Paris taxi driver who spoke neither English, nor, for that matter, French.) Then, the U.S. government employed me for two years for my ability to read Russian; and another branch of the same office required my ability to understand spoken Russian for two more years in London. Advanced degrees in Slavic linguistics were not an option in about 1958, so instead I went on to a teaching certificate; and as luck would have it, my first teaching job was in fact at the local university where I discovered that there were many questions yet unanswered by my training or experience. The first edition of Russian's World appeared in 1974. I made trips to Russia in 1967, 1970, 1987, 1991, 1993 and taught (English!) there at both the secondary and college level. Currently, a constant stream of visiting Russians helps keep my Russian au courant. If it really truly matters to you, I can be seen in the Russian's World, 2nd Edition on p. 168 accepting (a little) Russian money. Now, I'm even older, of course, a fact for which I am grateful considering the alternative.

...gives the necessary ... cultural information within which the Russian language is set ... should be available in every Russian department...
-Rusistika, 1999
...irreplaceable resource for the non-native scholar ... invitation into the culture ... author deserves the title 'Hero(ine) of Scholastic Labor'.. -Web page of the American Association of Teachers of Slavic and East European Languages a treasure trove ... what all Russians know just by being Russian, and what all students of Russian should know... - --Slavic and East European Journal, vol. 46, no. 2 (Summer 1996)

3. The Russian's World: Life and Language