Items related to We Remember, Elvis 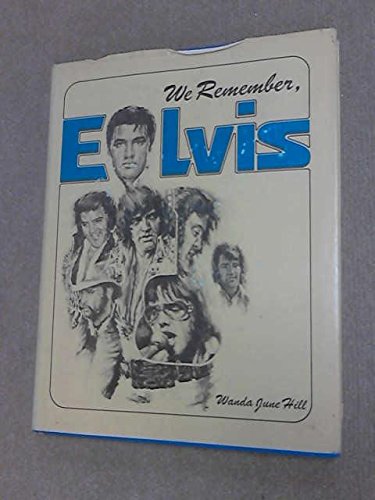 1978 First Limited & Numbered Edition. Yes, Elvis Presley ws the King - he outrocked, outsang and outsold them all. But beyond the hysteria, behind the burly security guards and the high walls surrounding Graceland Mansion, there was a private man who longed to have a normal life. This is the story of both sides of Elvis: the superstar and the man. It is told by his true friends. Wanda June Hill worked with Elvis and remained close to him for over 15 years, right up to the time of his death. Finding in her lifestyle an escape from his rock star's prison, he became an honorary member of her family and of her circle of friends. He would call, often several times a day, from wherever he happened to be, to share his worries, his loves, his prayers. They exchanged gifts and poems, home remedies and recipes, and advice on everything from Karate to marriage. Mrs. Hill knew that Elvis would have wanted to share his thoughts and dreams with each of his fans personally, if he ever had the chance. Now this book is his chance to share - and yours. Now you have the chance to cut through the gossip, and learn: What did Elvis feel when he went on stage in front of his fans? When did he first realize he was a star? How did Elvis really rate as a friend, lover, husband and father? What kind of girls did he date, and how did he treat them? What were his true feelings about his country, his God and his family? How did Elvis keep himself going in the later years, despite criticism, exhaustion and pain? And finally, what were the true circumstances of his death? Did Elvis know that he was dying? And now you can read the stories that Elvis loved to tell, including: The joke on Rona Barrett, Elvis' scuba lesson, the burial of a Mercedes, Elvis' paint job at the Las Vegas Hilton. Plus many unpublished new photographs, showing Elvis in action, on the stage and off.

Born in Kansas, raised in Oklahoma by dad & stepmother from the deep south, on a farm, as only child with lots of animals and open space. Married a Creek Indian, moved to So. Cal. with new baby. Got a job at MGM and met Elvis Presley through co-workers. He gave Wanda his home phone number, that rang in his Bel Air bedroom, she called, he answered, they talked, he asked, please call me again soon- when you have time. She did, he asked for her number and then called her husband for permission to talk to his wife; her husband who was the Elvis fan of the family, said okay- and the rest is history.