Items related to The Never-Ending Challenge of Engineering: Admiral...

The Never-Ending Challenge of Engineering: Admiral H.G. Rickover in His Own Words 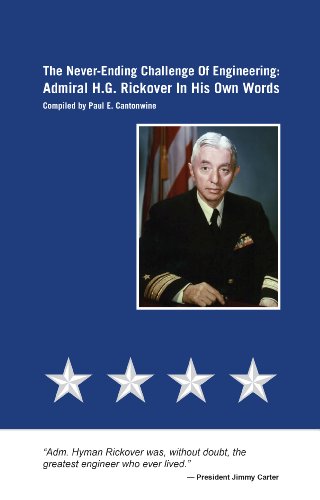 This book is a practical and philosophical look at the principles used by engineers and leaders from the perspective of Admiral Hyman George Rickover - one of America's greatest engineers. Admiral Rickover is an icon in the history of nuclear power, and one of his greatest contributions was to develop nuclear power technology to meet much higher safety and quality standards than past technological developments. The record of safety in his nuclear navy and in the US commercial nuclear industry is unique in the history of power technology, and thus the thoughts of the man most responsible for how nuclear power technology was developed in the United States should be of interest to all engineers and leaders working in a technical field-especially ones where customer/public safety and quality are paramount.

"Adm. Hyman Rickover was, without doubt, the greatest engineer who ever lived.  At the same time, he was a remarkably innovative educator and accomplished historian  and biographer. This selection from his lectures and editorials is an intriguing glimpse into his academic legacy." President Jimmy Carter

"This book is a treasure chest of Admiral Rickover's thoughts, principles, and philosophy of life.  It is not just for engineers.  This book should be read by, and serve as a reference for, all young people preparing for college and those early in their careers." Frank L. "Skip" Bowman Admiral, US Navy (retired) Third Successor to Admiral Rickover's Naval Reactors Program

"Paul Cantonwine has done the engineering profession a tremendous service in compiling this selection from the speeches, biographical sketches, congressional testimony, and writing on education of Admiral Rickover. Their words are as relevant to engineers, managers, policy makers, and educators today as they were when the Father of Nuclear Power first wrote and spoke them." Henry Petroski, Professor, Duke University; author of An Engineer's Alphabet, To Forgive Design, and other books on engineering and design

"For those of us in the nuclear profession, the name of Admiral Rickover is synonymous with the Navy nuclear program and the basis for commercial nuclear power.  In reading this book, one can get a better understanding of Admiral Rickover's passion, vision, and drive.  His focus on engineering, responsibility, safety, and innovation come through loud and clear.  This is a great read for those who like to look behind the curtain on a great individual." Dale Klein, former chairman, U.S. Nuclear Regulatory Commission

"When listing the nuclear pioneers of our world, Hyman Rickover is seldom mentioned.  This book demonstrates that he belongs near the top of the list.  It was Rickover who deployed civilian nuclear power for the world." Eric Loewen, Chief Engineer at GE-Hitachi and former President of the American Nuclear Society

“Anyone interested in the nuclear industry, hoping to get an inside perspective, will not be disappointed with this book.” Gale Hauck Former chairman of the Young Members Group, American Nuclear Society
and nuclear engineer, Westinghouse.

1. The Never-Ending Challenge of Engineering: Admiral H.G. Rickover in His Own Words

2. The Never-Ending Challenge of Engineering: Admiral H.G. Rickover in His Own Words