Items related to A Catholic Dictionary 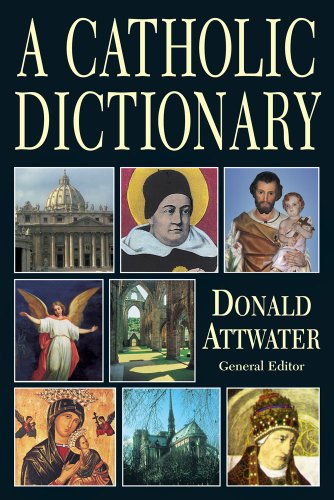 A Catholic Dictionary is on of the most valuable Catholic books ever published and is a goldmine of information with over 5,000 entries explained briefly, clearly and authoritatively, all in an easy to use format. This famous book focuses on the essentials of each topic, giving facts, definitions and the Church\'s traditional teaching, making clear distinctions, without confusing the issues with speculation, trendy opinions, compromise of dissent. This book went through several editions starting in 1931 and continuing through 1961. Entries and topics include: Celibacy of the Clergy; Islam; Byzantine Rite; Infallibility; Hair shirt; Halo; Capitol Punishment; Just Price; Sin against the Holy Ghost; Contemplation; Democracy; Heresy; Devil; Consecration at Mass; Conscience; Rights of Animals; Invocation of the Saints; Paganism. Imprimatur.

Donald Attwater, an author and convert to Catholicism, was born in 1892 at Essex County, England. Originally raised a Methodist, he was received into the Catholic Church in 1911 at the age of 18, and married Dorothy Bickle two years later. An author of many works, his compositional style was both clear and concise, and he firmly maintained that all organizations for good are useless unless they first impress their members to seek God s kingdom. Mr. Attwater's books include The Catholic Eastern Churches, The Golden Book of Eastern Saints, A Catholic Dictionary, Life of St. John Chrysostom, and A Cell of Good Living. He died at Sussex in 1977.