Around the World in 80 Days (The World's Best Reading) 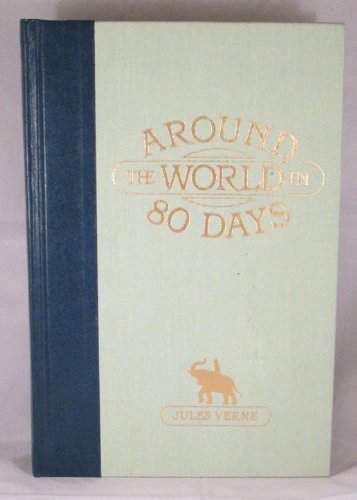 Around the World in Eighty Days was written during difficult times, both for France and for Verne. It was during the Franco-Prussian War (1870–1871) in which Verne was conscripted as a coastguard, he was having money difficulties (his previous works were not paid royalties), his father had died recently, and he had witnessed a public execution which had disturbed him. However despite all this, Verne was excited about his work on the new book, the idea of which came to him one afternoon in a Paris café while reading a newspaper. The technological innovations of the 19th century had opened the possibility of rapid circumnavigation and the prospect fascinated Verne and his readership. In particular three technological breakthroughs occurred in 1869-70 that made a tourist-like around-the-world journey possible for the first time: the completion of the First Transcontinental Railroad in America (1869), the linking of the Indian railways across the sub-continent (1870), and the opening of the Suez Canal (1869). It was another notable mark in the end of an age of exploration and the start of an age of fully global tourism that could be enjoyed in relative comfort and safety. It sparked the imagination that anyone could sit down, draw up a schedule, buy tickets and travel around the world, a feat previously reserved for only the most heroic and hardy of adventurers. Although a journey by hot air balloon has become one of the images most strongly associated with the story, this iconic symbol was never deployed in the book by Verne himself , but dismissed, it "would have been highly risky and, in any case, impossible."

This edition is printed in specially-designed large type for easier reading, and is printed on non-glare paper.

Shocking his stodgy colleagues at the exclusive Reform Club, enigmatic Englishman Phileas Fogg wagers his fortune, undertaking an extraordinary and daring enterprise to circumnavigate the globe in eighty days. With his French valet Passepartout in tow, Verne's hero traverses the far reaches of the earth, all the while tracked by the intrepid Detective Fix, a bounty hunter certain he is on the trail of a notorious bank robber.
Combining exploration, adventure, and a thrilling race against time, AROUND THE WORLD IN 80 DAYS gripped audiences upon its original publication and remains hugely popular to this day.

"From the Cassette edition.

1. Around the World in 80 Days (The World's Best Reading)

2. Around the World in 80 Days (The World's Best Reading) Jules Verne; Joseph Ciardiello and Jack Sullivan