Items related to The Return of Sherlock Holmes (Reader's Digest) 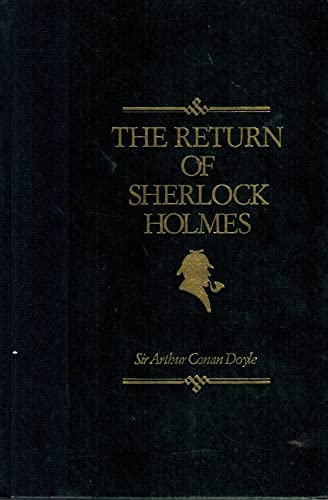 Three years have passed since Sherlock Holmes and his nemesis Moriarty vanished into the abyss of the Reichenbach falls. In that time the criminals of London have been able to sleep safe in their beds. But with the appearance of a dangerous individual with an air gun, the capital has never been in greater need of its protector. And so it is that Dr Watson meets a mysterious deformed man who reveals the truth behind the fateful final conflict between Holmes and Moriarty, and paves the way for the extraordinary return of the world's greatest sleuth in thirteen new tales of mystery and deduction.

This edition is printed in specially-designed large type for easier reading, and is printed on non-glare paper.

Britain's brilliant detective is back, in this final installment in the continuation of the classic collection of Sherlock Holmes stories. Using his extraordinary powers of deduction, Holmes gets to the bottom of four more baffling cases, and brings Sir Arthur Conan Doyle's timeless mysteries to life in a vivid dramatization from BBC Radio, complete with a full cast, a marvelous musical score and sound effects.

The Return of Sherlock Holmes Volume 3

In the tale of The Three Students, which Watson himself refers to as a "small but instructive adventure," Holmes's task is to determine which of three possible suspects has cheated in order to win the coveted Fortescue Scholarship. In The Golden Pince-Nez, a professor's secretary is found murdered, and the key piece of evidence -- a pair of eyeglasses -- is discovered clutched in the victim's hand. The Missing Three-Quarter takes Holmes and Watson to Cambridge, where the university's star rugby player had disappeared just prior to a crucial match. And The Abbey Grange is full of emotional intrigue when Watson finds himself captivated by a beautiful woman whose husband is found dead.

Book Description Reader's Digest Association, 1991. Hardcover. Condition: New. David R. Johnson (illustrator). Tight, clean and unmarked-"'Holmes,' I cried. 'Is it really you? Can it indeed be that you are alive? Is it possible that you succeeded in climbing out of that awful abyss?'-Missing, presumed dead, for three years, Sherlock Holmes returns triumphantly to his dear companion Dr Watson. And not before time! London has never been in more need of his extraordinary services: a murderous individual with an air gun stalks the city.-Among thirteen further brilliant tales of mystery, detection and deduction, Sherlock Holmes investigates the problem of the Norwood Builder, deciphers the message of the Dancing Men, and cracks the case of the Six Napoleons. ". Seller Inventory # 012262

8. THE RETURN OF SHERLOCK HOLMES (R

9. THE RETURN OF SHERLOCK HOLMES (R