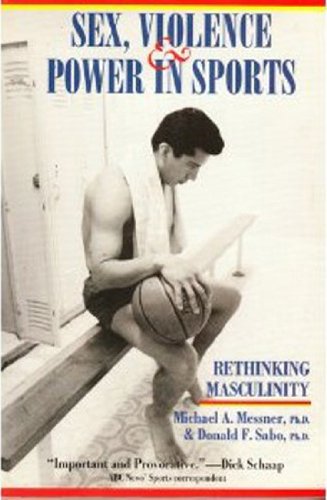 The authors, both academics and former athletes, examine the culture of male sports and its relation to concepts of masculinity. The basic premise is that male-dominated sports foster homophobia and the denigration of women. This is not new news for anyone who has spent time in an adolescent male locker room. What is news, however, is the authors' linking of locker-room mentality with data indicating that on some college campuses a third of all reported rapes involve male athletes, who represent less than a third of all males on campus. The authors hold that this sort of data--numerous studies are cited revealing the same trend--exposes the inherent flaws in traditional male sports culture. Sports, they say, breed intolerant males more prone to violence, domestic abuse, and homophobia and less likely to sustain a long-term relationship with a woman. This premise may or may not be entirely valid; further research is clearly needed. Still, the authors' findings--especially in context of the O. J. Simpson case--raise points of serious discussion regarding athletes and violence. And in these boring times, the book is bound to be sought by a variety of readers. Also, expect the Simpson connection to bring attention to what otherwise might be an unfairly neglected book. Wes Lukowsky

Following the heels of accusations against O.J. Simpson and the murder of Columbian soccer player Andres Escobar, and with a made-for-talk-shows title, could this book possibly be legitimate? You bet: men's studies scholars Messner (Power at Play) and Sabo (Jock), who have taught and written about the subject for more than a decade, have never been more serious than in this collection of essays and articles that address the relationship between sports and violence. Examining the male identity and the ways racism, sexism, homophobia and self-abuse manifest themselves on the field, in the locker room and through the media, Messner and Sabo offer chilling statistics and anecdotes to demonstrate the impact of popular practice and attitudes on individuals and society. If the collection is marred by some jargon-filled academic pieces and the authors' self-congratulatory feminism, it is still powerful. It is never more powerful than when the authors, both self-described jocks, look back at the brutalizing competition; the ostracization that is "team spirit" in its most virulent form; and the desperate contests in which points are kept on the scoreboard of women's bodies. Photos.
Copyright 1994 Reed Business Information, Inc.