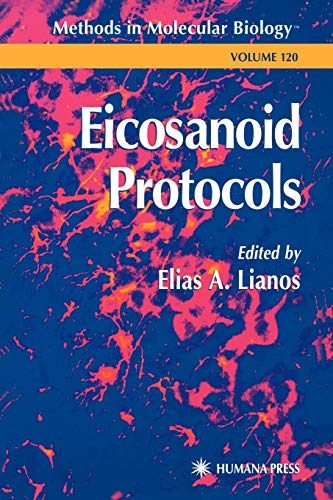 Since the pioneering work of U. S. VonEuler, G. O. Burr, B. Samuelsson, and others in the field of eicosanoids, research in this area continues to grow rapidly. Novel eicosanoids are being discovered even as enzymes that ca- lyze the synthesis of well-established eicosanoids are being critically studied with respect to their regulation and function. The novice in this field will most likely encounter three areas of intense research activity: regulation of expression and function of enzymes, i.e., ph- pholipases, cyclooxygenases, and lipoxygenases involved in the syntheses of established eicosanoids, characterization and distribution in tissues of eicosanoid receptors, and discovery and biologic roles of novel eicosanoids. This book is a compilation of chapters addressing these three areas. Most chapters of Eicosanoid Protocols address the first area, giving p- ticular emphasis to the cyclooxygenases and their two isoforms. This was done intentionally, because the discovery of the constitutive and inducible isoforms of this enzyme have introduced new concepts in the pathobiology of inflammation and in the use of nonsteroidal anti-inflammatory drugs. Although receptors of most established eicosanoids have been characterized and cloned, only one chapter (on the thromboxane A receptor) was devoted to this area.

In Eicosanoid Protocols, Elias A. Lianos and a panel of hands-on experts present cutting-edge methods for the study of eicosanoids, including prostaglandins, thromboxanes, and leukotrienes. The readily reproducible methods described hereconcentrate on studying the regulation of expression and function of enzymes, particularly cyclooxygenase (and its two isoforms), phospholipase A2, and lipoxygenases involved in the synthesis of established eicosanoids. Additional chapters are devoted to the characterization and distribution of the thromboxane A2 receptor in tissues and the biological roles of novel eicosanoids.
Timely and authoritative, the methods in this book will help their users in exploring the pathobiology of inflammation. Eicosanoid Protocols offers new and established researchers powerful, state-of-the-art tools to probe the regulation and function of eicosanoids.

"A very useful book for all specialists on eicosanoid acids, which was lacking until now in the literature." - Cellular and Molecular Biology