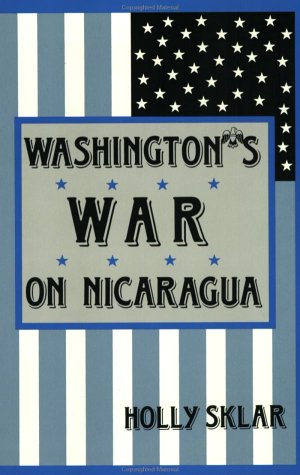 An account of U.S. policy from the Sandinista revolution through the Iran-contra scandal and beyond. Sklar shows how the White House sabotaged peace negoatiations and sustained the deadly contra war despite public opposition, with secret U.S. special forces and an auxiliary arm of dictators, drug smugglers and death squad godfathers, and illuminates an alternative policy rooted in law and democracy.

Washington's War on Nicaragua is a thorough investigation into the contemporary involvement of the American government's attempt to disrupt-overtly and covertly-the Nicaraguan revolution and destabilize the Sandinista government. Following a brief historical outline of United States military intervention into Nicaragua, the background to this government's current policy is set out with a description of the Carter administration's role during the period in which the opposition to the Somoza family rule was developing. Synthesized from a number of published sources and gleaned from interviews are the intricacies of intelligence operations and diplomatic efforts first to moderate Somoza's domestic policies and then to combat the leftist elements in the country that succeeded in deposing Somoza and running the country. The arguments and evidence presented, while not specifically stated, are put forth in a manner whose purpose is to indict the American foreign policy toward Nicaragua and Central America. The materials are geared to appeal to the readers' emotions. Thus, there is a wealth of information but little analysis, and the framework is not especially clear except for the obvious intent of the author. All the vignettes tend to cast either an evil light on American governmental intentions or at least a strong sense of incompetence, especially when a covert action fails and comes to public light. Overall, this is one of the better studies on the United States involvement in the undercover war with Nicaragua. It is strongly recommended to a wide audience ranging from the general reader and the public library to the specialist in an academic setting. -- From Independent Publisher

Among recent books on U.S. policy in Nicaragua, this one stands out for its combination of fact, historical analysis and open disgust over American arrogance. Sklar ( Trilateralism ) maintains that fear of "another Cuba" is an illusion fostered by the Reagan administration's propaganda-lobbying effort and argues that "another Vietnam" is a more likely parallel. She warns that a Central American invasion will remain a prospect even after Reagan leaves office. Both liberals and conservatives claim the unilateral, self-ordained right of the United States to define Latin American destiny by interference, the author contends, finding this attitude nowhere more blatant than in U.S. policy toward Nicaragua. Sklar advocates ending all efforts to manipulate, destabilize or overthrow the Sandinistas, and the payment of reparations, the signing of a nonaggression pact between Washington and Managua, and cancelation of all U.S. military maneuvers in the region.
Copyright 1988 Reed Business Information, Inc.