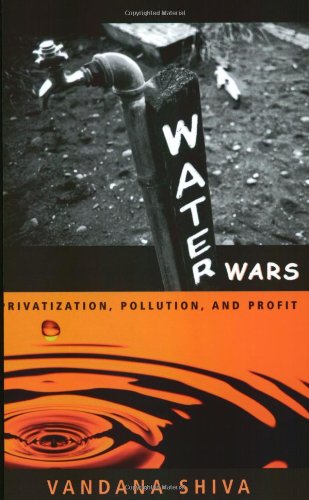 While draught and desertification are intensifying around the world, corporations are aggressively converting free-flowing water into bottled profits. The water wars of the twenty-first century may match—or even surpass—the oil wars of the twentieth. In Water Wars: Privatization, Pollution and Profit, Vandana Shiva, "the world's most prominent radical scientist" (the Guardian), shines a light on activists who are fighting corporate maneuvers to convert this life-sustaining resource into more gold for the elites.

In Water Wars, Shiva uses her remarkable knowledge of science and society to outline the emergence of corporate culture and the historical erosion of communal water rights. Using the international water trade and industrial activities such as damming, mining, and aquafarming as her lens, Shiva exposes the destruction of the earth and the disenfranchisement of the world's poor as they are stripped of rights to a precious common good.

In her passionate, feminist style, Shiva celebrates the spiritual and traditional role water has played in communities throughout history, and warns that water privatization threatens cultures and livelihoods worldwide. Shiva calls for a movement to preserve water access for all, and offers a blueprint for global resistance based on examples of successful campaigns.

Vandana Shiva is a world-renowned environmental leader and recipient of the 1993 Alternative Nobel Peace Prize (the Right Livelihood Award). She is author of several books, including Stolen Harvest: The Hijacking of the Global Food Supply (South End Press, 2000); Biopiracy: The Plunder of Nature and Knowledge (South End Press, 1997); and Staying Alive (St. Martin's Press, 1989). Shiva is a leader, along with Ralph Nader and Jeremy Rifkin, in the International Forum on Globalization. Before becoming an activist, Shiva was one of India's leading physicists.

A world-renowned environmental leader and recipient of the 1993 Alternative Nobel Peace Prize (the Right Livelihood Award), Shiva has authored several bestselling books, most recently Earth Democracy. Activist and scientist, Shiva leads, with Ralph Nader and Jeremy Rifkin, the International Forum on Globalization. Before becoming an activist, Shiva was one of India's leading physicists.

“An excellent starting point for anyone who wants to understand the forces driving water scarcity today and threatening its future supply.”
—Women’s Review of Books

“A chilling, in-depth examination of the rapidly emerging global crisis.”
—In These Times

“Shiva is a burst of creative energy, an intellectual power.”
—The Progressive

“One of the world’s most prominent radical scientists.”
—The Guardian