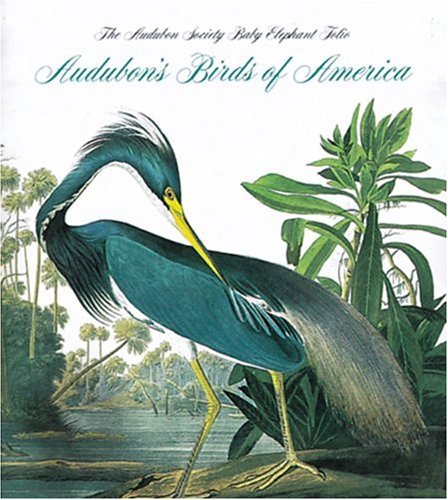 This Book is in very fine condition. This book includes a Dust Jacket And has no wear or tears. You will not be disappointed.

Roger Tory Peterson established himself as America’s leading ornithologist with his best-selling Field Guide to the Birds. Like Audubon, Peterson received many honorary degrees and awards, including the Presidential Medal of Honor.

Virginia Marie Peterson was a scientist and an expert on the environmental effects of oil spills.

Like many another genius, John James Audubon was the right man in the right place at the right time.” He came to America with a fresh eye when it was still possible to document some of our unspoiled wilderness. He was also, during his lifetime, witness to the rapid changes that were taking place. Audubon’s real contribution was not the conservation ethic but awareness. That in itself is enough; awareness inevitably leads to concern.

Audubon’s frequent references to the palatability of birds and their availability in the market make us realize how far we have come in bird protection, if not in our epicurean tastes. He wrote that the Barred Owl was very often exposed for sale in the New Orleans market; the Creoles make Gumbo of it, and pronounce the flesh palatable.” Not only does he speak with a gourmet’s authority about the edibility of owls, loons, cormorants, and crows, but also the gustatory delights of juncos, white-throated sparrows, and robins.

It may seem paradoxical that this prototype of the woodsman-huntsman should have become the father figure of the conservation movement in North America. Like most other pioneer ornithologists, he was literally in blood up to his elbows.” He seemed obsessed with shooting; far more birds fell to his gun than he needed for drawing or research or for food. He once said that it was not a really good day unless he shot a hundred birds. But in his later writings, when recounting old shooting forays, there is a note of regret, as though his conscience were bothering him about the excesses of his trigger-happy days. He deplored the slaughter, especially when perpetrated by others a double standard, if you will. But only once did he ask forgiveness for his acts. After describing the carnage that took place in the Florida Keys when he and his party landed in a colony of cormorants, committing frightful havoc among them,” he wrote: You must try to excuse these murders, which in truth might not have been so numerous had I not thought of you [the reader] quite as often while on the Florida Keys, with the burning sun over my head and my body oozing at every pore, as I do now while peaceably scratching my paper with an iron pen, in one of the comfortable and quite cool houses of Old Scotland.”

Repeatedly in his writings he reveals this dual nature, or inner conflict. After finding the nest of a pair of least sandpipers he wrote, I was truly sorry to rob them of their eggs, although impelled to do so by the love of science, which offers a convenient excuse for even worse acts.” Again, when he first met the arctic tern in the Magdalene Islands: As I admire its easy and graceful motions, I felt agitated with a desire to possess it. Our guns were accordingly charged with mustard-seed shot, and one after another you might have seen the gentle birds come whirling down upon the water Alas, poor things! How well do I remember the pain it gave me, to be thus obliged to pass and execute sentence upon them. At that very moment I thought of those long past times when individuals of my own species were similarly treated; but I excused myself with plea of necessity, as I recharged my double gun.” Another example of Audubon’s compulsion to shoot.

In light of his record it would seem inappropriate that one of the foremost conversation organizations in the United States should adopt Audubon’s name, but not so. He was ahead of his time. Like so many thoughtful sportsmen since, he eventually developed a conservation conscience. In an era when there were no game laws, no national parks or refuges, when there was no environmental ethic, when vulnerable nature gave way to human pressures and often sheer stupidity, he was a witness who sounded the alarm. He became more and more concerned during his later travels when, with the perspective of his years, he could see the trend. He noticed that prairie chickens, wild turkeys, Carolina parakeets, and many other birds were no longer as numerous as he once knew them. He wrote vividly and passionately about what he saw. He pondered the future, and some of the passages of his writing were prophetic.

Audubon could not have known that because of his artistry and his writing his name would become a household word, synonymous with birds, wildlife, and conservation. The National Audubon Society, formerly known as the National Association of Audubon Societies, was launched in the early years of this century, when no one spoke of ecology” or environment.” It was primarily a bird organization at first. Over the years the Society has gone through a philosophical metamorphosis. Bird-watching was the precursor of ecological awareness, and Audubon” has become a symbol of the environmental movement.

John James Audubon received high honors during the two decades prior to his death in 1851, but his greatest fame came in the century that followed. He had sparked a latent nationwide interest in the natural world, especially its birds, and his name became enshrined in hundreds of streets, towns, and parks across the land. Even a mountain peak in the Rockies is named in his honor. In the section of New York City where he lived there is an Audubon Avenue, an Audubon Theatre, an, now translated into digits, an Audubon telephone exchange. There was even a group that called themselves the Audubon Artists,” although they did not draw birds. But the greatest monument to his name is the National Audubon Society, which, unlike the Audubon gun clubs” before the turn of the century, reflects the other side of John James Audubon, the passionate concern for the survival of wildlife and wild America that he developed as he grew older.